Early next year AMD will launch its first mobile graphics circuits at the 28nm node. The company has made the most of TSMC’s 40nm technology over the last two years and now it is finally time to upgrade, and once again its TSMC at the wheel.

By shrinking the transistors from 40nm to 28nm AMD can create even more advanced circuits and lower power consumption over current architectures, which is really good for mobile chips.

When Taiwan Semiconductor Manufacturing Company skipped its plans for 32nm AMD and NVIDIA had to line up and instead wait for the 28nm technology. Both AMD and NVIDIA were forced to launch new graphics cards on the 40nm node, Radeon HD 6000 and GeForce GTX 500.

Not until Q4 2011 the new 28nm technology will be ready for mass production and new leaked documents hints that we will see three new mobile GPUs from AMD made with TSMC’s fresh 28nm technology. 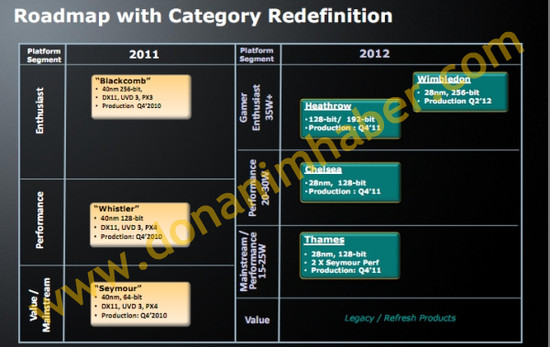 The new graphics card family is expected to launch as Radeon HD 7000M and Wimbeldon will be the most powerful of the bunch, which is not expected to arrive until Q2 2012. This with a 256-bit memory interface and 4GB GDDR5 memory, also 2GB will be used and pwoer conusmption has been set to about 65W. The circuit is expected to be 25% faster than Blackcomb.

Heatrow Is the next in line and and takes aim for enthusiasts and gamers with a power consumption of 35-45W. The memory bandwidth is 128 or 192-bit and the buffer is set to 1.5GB or 3GB GDDR5.

Themsen targets the mid-range and will consume between 15-25W with a 128-bit memory bus and 1GB or 2GB GDDR3/GDDR5 memory. With twice as wide memory bus as current circuits performance will be up to 30% better.

AMD is expected to launch its three new mobile graphics circuits as early as November 2011, what this means for AMD’s first discrete 28nm GPUs remains to be seen.