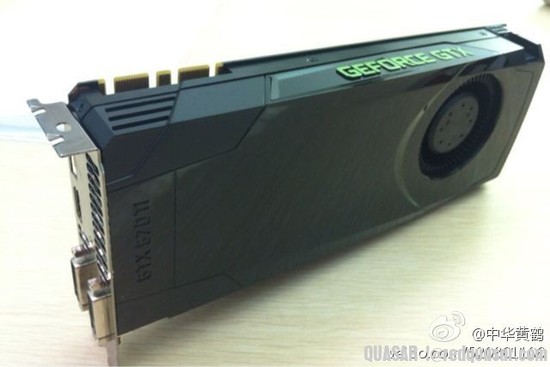 NVIDIA will according to rumors launch the first 28nm GPU on March 23rd in the form of GK104. The first graphics card based on the new circuit is said to get a new efficient Turbo function to make it more competitive against AMD’s flagship, among others in popular games like BF3.

GeForce GTX 680 will get a full cover coooler with a single radial fan placed at the back of the card according to the leaked pictures. It is a dual-slot design with two DVI outputs, HDMI and DisplayPort.

Even if the picture published at a Chinese forum is said to depict GeForce GTX 670 Ti everything points to it being the first Kepler card, thus GeForce GTX 680.

According to sources to VR-Zone NVIDIA has used a well known CPU technology with its new graphics card GeForce GTX 680, so called Turbo mode with dynamic overclocking for optimized performance after load and energy consumption. The card will come in at 705 MHz, but can automatically overclock to 950 MHz or for that matter underlock to 300 MHz depending on the load. This will not only optimize performance but also energy consumption says NVIDIA. The 1 536 CUDA cores will work at 1411 MHz at full load at most.

Without any details on how Kepler’s dynamic overclocking works we can see amajor difference from current 2D and 3D clock frequencies where the card is locked to a certain frequency depending on the task. With Kepler’s Turbo function there should be a number of frequency steps in the same load range, which sounds like a sensible evolution for GPUs.

NVIDIA will equip GeForce GTX 680 with a 256-bit memory bus and pair it with 2GB or 4GB GDDR5 memory. The good news for NVIDIA is that it will get the highest GDDR5 frequency yet, even though AMD was the company to set the standard once. With a clock frequency at 6000 MHz this will give GeForce GTX 680 192GB/s memory bandwidth, which puts it between Radeon HD 7950 and Radeon HD 7870.

Performance looks promising according to the leaks. GeForce GTX 680 will not be the top model of the Kepler family, but is still expected to compete with AMD’s flagship Radeon HD 7970. The numbers mentioned by VR-Zone include Radeon HD 7970 winning by 10% in 3DMark11, while GeForce GTX 680 gets 10% better performance in Battlefield 3. As usual we can expect some wins for AMd and some for NVIDIA, but since NVIDIA still has the top model GK110 in development there is more to come later this year.

As always with unconfirmed information this should be considered with a pinch of salt, but it shouldn’t take more than a week before we know for cerain what NVIDIA’s first 28nm cards really performs.

I dont believe that is the GTX680’s specs because Nvidia’s top cards have 384-bit buses.

However, NV isn’t launching the flagship GK110 until later (summer or Q3).