AMD is expected to launch the new Opteron series based on the Magny-Cours architecture sometime in Q1 2010. So far the company has been very quiet when it comes to the exact specifications of the first chip, but partners has taken some liberties now. Server builder Oakville Mehlville Computers has posted an auction for four twelve dodeca-core Magny-Cours processors on eBay (via X-bit labs) and the new AMD Opteron 6174 processors has a price to match the rarity of the items.

Oakville Mehlville Computers wants a total of 7000 dollars for the quartet of processors, but that’s just the starting bid. If you want to buy them now you will have to fork up another thousand dollar, adding up to 8000 dollar for instant purchase.

According to the auction the processors operate at 2.2GHz. They slide into the all new G34 socket known for its rectangular shape. Unfortunately it might be troublesome to find motherboards for the chips, but there is also an auction for a complete Magny-Cours server where all four processors are paired with  Tyan S8812 motherboard, 64GB RAM and some other goodies. This kit will cost you up to 20,000 dollar. 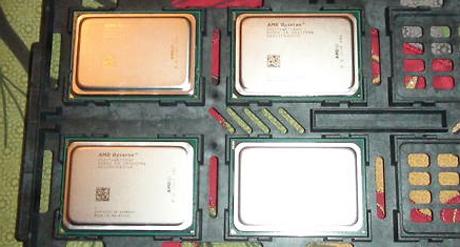 We don’t know what made Oakville Mehlville Computers sell these processors and servers on eBay, but we’re presuming some sort of PR stunt, although a risky one.