The Brazos platform from AMD took the market by storm and quickly replaced Athlon II and Phenom II in notebooks. The successor has been kept hidden and we now know a little more about that really do strengthen the ideal of a SoC design from AMD will all circuits inside.

The new Deccan platform will be the first design where it has integrated processor, graphics, northbridge and southbridge into one single circuit. The goal is to reduce power consumption and make it an even more energy efficient design than before. 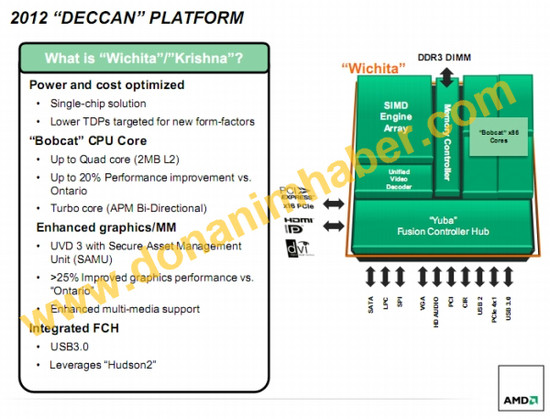 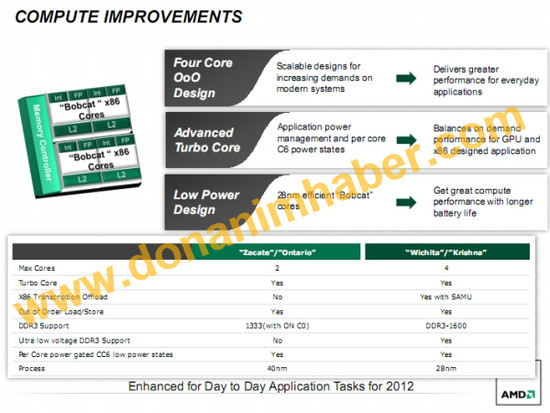 Wichita/Krishna will bring up to four ”improved Bobcat” cores and 2 MB L2 cache, unlike the current Ontario/Zacate that also brings half of that to the game, två cors and 1 MB L2 cache. AMD promises up to 20% better performance on the processor bit and over 25% better graphics performance, we can also expect Turbo Core will play a bigger role in all circuits. 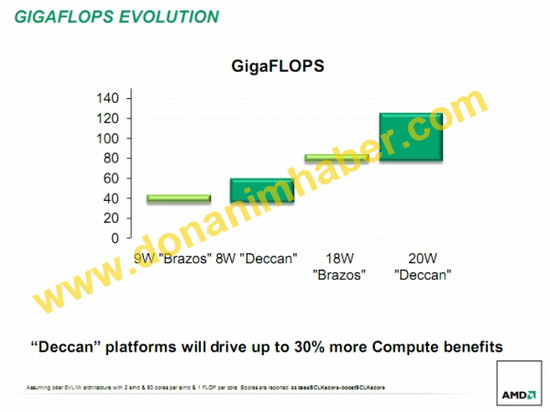 Slightly higher TDP for the top model, but then the southbridge comes integrated 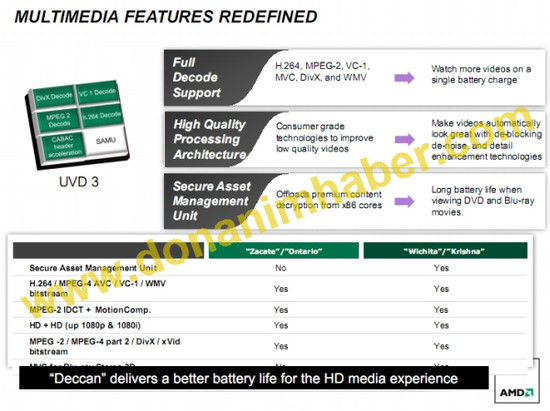 We see the same UVD 3 (Universal Video Decoder) as before, but also something called SAMU, Secure Asset Management Unit. SAMU will off-load the processor more than before when playing video for longer battery times. With that AMD promises playback of 1080p movies, which the current Brazos platform already can.

Wichita/Krishna will be the first SoC design from the company and this time it has also baked in the southbridge. The integrated circuit  ”Yuba” will be based on Hudson2 that offers SATA 6.0 Gb/s, but aso USB 3.0 will be available with Deccan.

The focus of Deccan is not necessarily groundbreaking performance but closer integration and lower energy usage where it also hopes to rach new, lower TDPs. The market segments for Deccan is mainly notebooks, small desktops, embedded products, and similar. We can also count on more efficient versions of Deccan for tablets, as spilled by AMD’s Rick Bergman.

Deccan is expected to appear in early 2012, but there is no exact launch date. It looks like a very interesting platform for compact builds and notebooks. it would also be more interesting if there were more applications that took advantage of the GPGPU performance it has to offer.