AMD speak up on mobile Zacate and Ontario APUs

Zacate and Ontario will be the first two APUs from AMD and by the end of the year they will arrive sporting processor cores, graphics and video video processor in the same silicon. AMD has now confirmed that the information we earlier posted on the power consumption and market segments is correct.

Both circuits will be used in Brazos, the code name of AMD’s mobile and stationary platform for these two APU circuits. Both Zacate and Ontario can be used in nettops and small desktops, even if AMD is focused on portables.

Both Zacate and Ontario builds on the AMD Bobcat architecture and will sport dual cores, a DirectX 11 graphics circuit (builds on technology found in current discrete circuits) and an interated video processor, dubbed Unified Video Decoder. Together with an integrated memory controller the chip houses all of these components on a surface of 15x15mm.

AMD Zacate and Ontario also supports DirectCompute and OpenCL, the latter which Intel Sandy Bridge lacks support for with its graphics circuits. Even if the launch of the circuits will be before the end of the year we don’t expect any products available until early 2011. 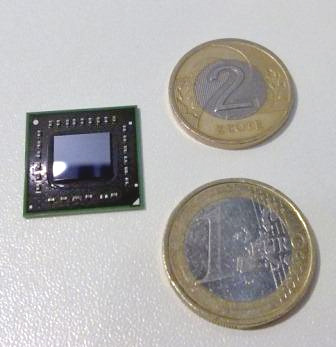