The Creative Inspire 6.1 6700 was released at the same time as the Audigy2 so that you with both the sound card and the speaker system get a complete 6.1 sound system for a reasonable (for some, for some not) amount of money…

Today when the
sound quality of our sound cards become better and better, and the computer
is quickly becoming our central "entertainment unit", when we have
more than 2 channels in our computer environment, the speakers play a bigger
role.
That stereo is no longer enough is specially obvious in games using 5.1 channel
sound or more for better presence and feeling. In the latest 6 months when several
sound cards have the possibility to play DVD Audio and have overall better sound,
it is not enough to plug in your computer to an ordinary amplifier.

To make a sequel
to the review of Creative’s Audigy2/ Audigy2 Platinum Ex and continue on the
sound theme, I will now take a closer look at two different speaker systems.
The speaker systems are Creative’s Inspire 6.1 6700, and with the long name:
Cambridge SoundWorks MegaWorks 5.1 550 THX.

With its price at about 1100sek (~$124),  Creative Inspire
6.1 6700 is a very competitive system which today is totally unique with 6.1
channel sound. I have searched with light and torch after a manufacturer with
a similar system, especially in this price range, without success.

When it comes to availability, Creative’s products are usually very easy
to find since they are in stock in more or less in every computer shop in
the world, Inspire 6.1 6700 is not an exception. That the grade becomes the
highest possible is therefore not so strange.

Cambridge SoundWorks MegaWorks 5.1 550 THX has a very competitive
price and is a couple 10’s of dollars below the nearest competitor. There is
a number of different 5.1-systems at today’s market but few got the THX certificate.

Because Cambridge is a part of the company Creative, it is not so hard to
get a couple of these speakers.

Inspire 6.1 6700’s remote control cover the most basic functions
such as volume combined with on/off and bass adjustment. Then there is also
a headphone connection with a mini stereo tele plug (3,5mm).

MegaWorks 5.1 550 THX’s remote control is maybe as expected a little more
advanced and through this you can adjust the levels of bass, treble, center
and the two rear channels. Except this there is also on/off and a mute button,
and there is of course a headphone connection of the same type as Inspire’s
remote control. Every level and function is indicated by leds, the levels
are graded from one to five. It has everything that you can ask for, and a
little more, of a remote control.

Inspire 6.1 6700 has a rather interesting feature which allows
upmixing from 5.1 sound to 6.1 sound, if you don’t have 6.1 sound on your sound
card. It is controlled by a little switch on the amplifier.

MegaWorks 5.1 550 THX has also got a little feature where you can connect
a sound source of your choice, via the mini stereo plug (3,5mm) at the amplifier.

The sound which
comes from Inspire 6700’s speakers is relatively clear and evenly divided, but
it lack a bit too much middle register to be very good.

Something that
made me confused was that the frontal center speaker differs from the other
satellites, it has a more powerful element at 20W. The whole principle with
a surround system is that you have equal satellites and the reason for that
is that the sound is supposed to be the same no matter which direction/speaker
it comes from. Still, Creative has succeeded relatively good in voice-match
the center with the other satellites.

The subwoofer has a 6.5″ long-beating element which uses Creative’s SLAM-technology
and it produces a deeper bass than what you may expect, despite the little
format.

It was first when I tested playing a DVD movie that I noticed the speaker’s
inability to go all the way. But for most of the people mostly play ing MP3
music and use their computers for gaming, I think the system is enough. The
games get a whole new dimension when you play games with support for EAX 3.0
(EAX Advanced HD) in combination with Inspire 6700. It is undeniably a cool
experience.

The first thing I noticed with MegaWorks 5.1 550 THX was the sound quality
when I played the DVD-Audio-sample disc which came the Audigy 2. The system
gives a very balanced and composite sound picture. And this when the speakers
were not even yet "played in".
The satellites have a 3.5″ driver which gives a soft and pleasant sound over
the whole register. The subwoofer has a long-beating 8″ element which gives
a well balanced bass sound. The amplifiers BASH (Bridged Amplified/ Switching
Hybrid) technology allows a sound pulse of total 500 watts, something I noticed
when I played some DVD movies. The system can really play strong, and I turned
up the volume really high to try to make it "crack" but with no
success. So, you can say that I was really sold, this is the best sound I
have heard from such small speakers. The MegaWorks system is so good that
you can use it directly with your DVD player at home and even get a better
sound than what many of the "cheaper" home theater systems can deliver.
And this even though the satellites are of the "near field" type,
which means that they are supposed to be pretty close to the listener.

Visually the both
systems are quite appealing with their black colour, they simply harmonize with
the environment.

The satellites use a ”rare-earth” magnet with a higher efficiency
than regular iron magnets used in conventional speakers. You can use a smaller
magnet of that material but still get the same attributes as from a similar
iron magnet.
As I said earlier, the center speaker in Inspire 6700 differs
from the other satellites. This both in appearance and effect, the satellites
are 8W while the center is at 20W. To have a center speaker that differs from
the other satellites can be risky because the sound will then sound different
depending on which direction is comes from, but in this case the difference
is hardly noticeable.
The subwoofer of the Inspire 6700 is made of wood, is ported
and has a forward facing 6,5" element. It also contains the amplifier-part
with all the connections.

MegaWorks subwoofer is also made entirely of wood but has a downward facing
8" element . The box is double ported and that minimizes the blowing
and sucking noises that a single ported construction sometimes produces. The
feet on the box has soft rubber parts that absorb vibrations from the bass
and the powerful amplifier.

The Creative Inspire
6.1 6700 was released at the same time as the Audigy2 so that you with both
the sound card and the speaker system get a complete 6.1 sound system for a
reasonable (for some, for some not) amount of money.

When it comes
to development, much has happened with the sound since Creative released their
Inspire 5000 series. This can be heard on the base, as it doesn’t have the
tendency to "rumble". So, Creative’s Inspire 6700 is an ”okay” system,
and if we also look at what it costs, you get a lot of sound for your money.
The fact that Inspire still is alone among the 6.1-systems, its low price
and relatively high quality makes us give this package Best Budget choice.

The Cambridge SoundWorks MegaWorks 550 5.1 THX is based on the successful
Cambridge SoundWorks MegaWorks 510D 5.1 THX and it is the next generation
speakers. The first thing you see is the THX logo on all the speakers and
the port on the subwoofer. The new elements in the satellites makes it possible
to play louder and still keep the quality. The subwoofer produces a more balanced
sound and is not as apparent as in the 510D system, this can partially be
because of the porting, and may also be the reason for the THX certificate.

The only disadvantage with MegaWorks 550 is that the speakers are so good
that you can actually hear how bad the MP3 format really is.

This system combined with Audigy 2 and you get a THX certified system for
your computer for under 4300 sek (~ $475). That number might seem a bit high
in the beginning, until you start thinking of what such a system would cost
separately.

Despite it’s lower grade we think that Inspire
6700 should get the Best Budget Choice award. For a low price you can get one
of the markets few and qualitative 6.1-system.

Thanks to Creative
for making this review possible. 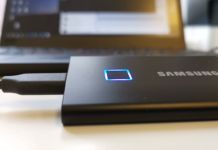 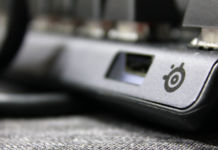 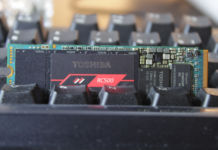