Case modding in all its forms is getting ever more popular. Until now we at NordicHardware have not had the resources necessary to write mod guides and such, but hopefully that is about to change. With this guide/review we will head into modding territory. We will start out with a very common mod, namely exchanging the case LED’s and add some internal case lightning…

Case modding in all its forms is getting ever more popular. Until now we at NordicHardware have not had the resources necessary to write mod guides and such, but hopefully that is about to change. With this guide/review we will head into modding territory. We will start out with a very common mod, namely exchanging the case LED’s and add some internal case lightning. Almost anyone can do these mods, and it is a great place to start out if you want to get into modding for real. We will show you how to switch the LED’s for HDD activity, power and the floppy led. We will also try out a pair of lighted feet for the case, but we will start with the LED’s, read on!

The LED’s on front of the case are usually green and orange, not a very good combination. When it comes to these two LED’s I prefer to have different colors, but that is of course my opinion. I’m going to switch to a blue LED for power-on and a red indicating harddrive activity. If you now are going to exchange your LED’s it is practical to install a socket so you don’t have to solder again the next time you want to change color on your LED’s. Eksitdata also has a very fitting product to go with the LED, a ”cable with blue LED”. It costs 49 SEK (Exchange rates), a totally acceptable price.

The product simply consists out of a contact for the mainboard and an LED-socket in the other end. Along with the one meter long cable comes a blue 3-mm LED. It will be perfect as a power LED for my case, as it also shines quite brightly. Installation is easy, first step is to remove the old LED and cable. Then you fasten the socket where you want the LED to sit, connect it and plug in the LED. Note that the LED also must be turned the in right direction. The result was very neat, it is the details that makes the case.

There are of course more fields for this product, the handy computer user can surely think of an endless amount. For a nightrider it is perfect, as you usually don not want the circuit-card right where the LED’s are. Next step is to install new feet on the case.

A part of the computer that you seldom put any greater effort on getting nice is underneath it. Even though it seems natural because you can not see it, there are several nice things that you can come up with. Lighting it from beneath is a good example. Although, it is hard to get it to look nice. With CCFL-pipes it will be too bright or the LED’s don’t give an even shine. The company ”Logisys Computer” has a good solution for this. Transparent feet with LED’s mounted on them. A very nice construction that can become really good if it’s performed in the right way.

In the package you get four acrylic feet, four fitting pieces of adhesive tape and a soldered cable with four LED’s, a switch and an easily modified ATX backplate. In addition, you will also receive instructions on how to mount the feet. The length of the cable is sufficient, the cables go all the way to the feet with some margin without creating big cable tangles. The switch should be mounted on the back side of the chassis using the ATX backplate. A very convenient solution that does not require any modifications at all.

The installation is not a problem at all, you just remove the existing feet that you have on the chassis and fasten the new acrylic feet with the two-way adhesive tape. Then you press the LED’s into the predrilled holes in the feet, and the molex contact is connected. It ca not be much simpler, plus that it is compatible with all the chassis that has holes for the feet. Please note that the switch doesn’t fit in all places on all motherboards, I had some problem with capacitors that were in the way.

Above there are some pictures on how the whole thing went, stylish and neat if you ask me. The lighting really brings out the box in a different way, and it does not look that boring down there. The product costs about 200 SEK. Whether it is worth it or not you have to decide for yourself. I like the idea and the implementation anyhow. The next step, that is also the last, is to the exchange the LED in the floppy disk drive, so read on.

The whole point of this reconstruction is to exchange all the ugly standard LED’s, and a component that usually has a green LED is the floppy disk drive. Most of us do not use the floppy drive very often, but the few times it is used a nice LED can really make the appearance better. The most common thing when you change the LED it is either red of blue, but white LED’s are starting to become cheaper and gives a stylish and pretty unique appearance.

The modification usually does not take more than a minute for the experienced electrician, so it is not a big operation we are talking about. The first step is to take off the front of the floppy drive, and to remove the lower piece of metal protecting the circuit board. Be careful not to remove any other screws holding the pieces of metal, because if you remove one of the calibration screws, it can get very strenuous to get the floppy drive to work again. When you have picked the drive apart you should locate the LED.

Now you just have to change the LED. The fact is, they are all ”one-way” and therefore only work if you turn them the right way. To know which way to turn the LED, you have to look inside it, as all LED’s have one big and one small piece of metal inside of it. The new LED is to be turned to the same way as the old one. Then you just have to solder the LED and screw it all together, giving you a newly modified nice floppy drive with a neater LED in it.

One problem you could possible encounter is about the working voltage/current on the LED’s. There is a current limiting resistor before the LED to let it have the right working voltage, and in the worst case you have to change it. Blue LED’s often want more than double the voltage compared to others such as green or orange, and the current limiting resistor is naturally dimensioned for the standard LED. In most cases you can mount the LED without modifying anything else. Please note that the LED is not going to shine with full capacity.

We begin the conclusion with some mixed pictures on how the final result worked out, and before you complain about my faceplates not matching the rest of the box I can reveal to you that there are things going on here as well. I think these small modifications are well worth the trouble and money, since lighting really brings out the box.

The LED with cable is a very practical aid when you are doing a project such as this, even though you do not change your LED’s every day it still saves a lot of trouble for you the next time. For those who want to take another step the feet for the box is a good step, and this product surprised me to the better on several places. The strength of the light is orderly, there are not just some small points of illumination under the box – it really shines. This combined with the relatively low price and easy procedure of installation makes me able to strongly recommend the product. Shortly you can say that these are two good products for the beginner as well as the more advanced user.

The modification of the floppy is a little more advanced since it requires both a soldering-iron and some skills. If you just go slow and think about what you are doing, it can be a sensible first-time-soldering, but if you make any bigger mistakes you are risking a floppy drive. The floppy drive is not the most used part either, but the few times you do it gives a entirety impression that is very good.

Thanks to Eksitdata for making the article possible! 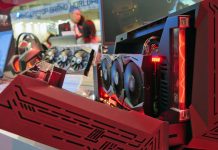