Viewsonic has made a name with its development and launch of extremely fast LCD monitors. We’ve taken a closer look at one of the fastest; VX924 with a response time at only 3ms.

ViewSonic has been one of the leading LCD monitor manufacturers on the market the last year or so, mainly because of its fast LCD-panels. ”The battle for the fastest LCD”, which we’ve reported on at numerous accounts here at NordicHardware has grown to almost ridiculous proportions, but the question is how much truth there is behind these hyped specifications.

In this test we’ll take a look at ViewSonic’s weapon in the fight for the gamers, its VX924 has a response time of only 3ms. Earlier the specified response time was 4ms for this monitor, but after doing some additional testing they concluded that the correct value is 3ms.

We’re moving along with the specifications on the next page. 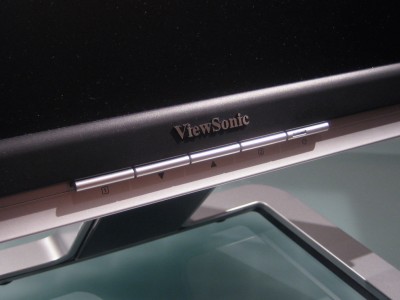 Following specifications are from ViewSonic’s website and the manual.

What the specifications tell us right away is that the low response time of 3ms is measured from gray to gray, while black to black is at 4.8 ms. ViewSonic are honest enough not to make a big secret of the fact that it’s actually a 5 (4.8) ms monitor, even if it at first glance sounds too good to be true. It’s worth pointing out that many other manufacturers often only tell us the gray to gray value.

Below are the contents of the package.

Connect the cables and install the drivers. Thats what it takes for the user today, no hardships. The disc contain the drivers and a manual, nothing fancy. 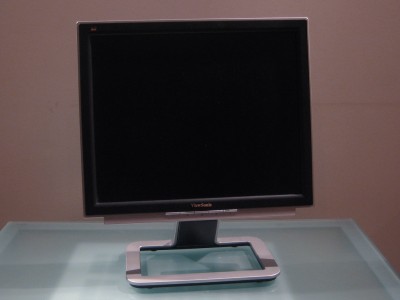 The only thing you can adjust is the tilt of the screen, which is often enough. It’s pretty hard to tilt and the plastic groans in the process, but once in the correct position it wont budge unless you use some force. It’s very stable Z-wise, but somewhat rickety X-wise. Something I miss is height adjustment, since the the foot is pretty tall and in my case I sit at a desk that have the keyboard and mouse in a lower position than the screen, the screen comes up a bit high. The foot otherwise gives a more solid impression than the screen, which gives away some fragile noises when you squeeze it. The foot is a much more solid construction, but it’s construction doesn’t allow you to rotate the screen, you have to lift the whole package if you wish to rotate the screen. Again it’s not too cumbersome for the normal user who adjusts the settings once and then leaves it at that. The pictures below shows the monitors maximum tilt forwards and backwards. 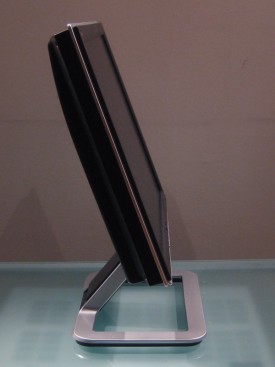 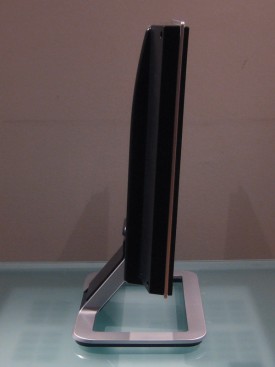 The OSD feels a little old-fashioned; there are considerably better designs in other monitors today. There aren’t any settings missing for the home user, but a somewhat more convenient and fresh-looking interface would have been nice. A fact that is true for a lot more monitors than just Viewsonic and VX924.

Whether or not you fancy the design is a matter of personal taste, but on this page I will try to comment on the appearance, its functions and the quality in all respects excluding the image properties themselves, which will come later on in the review. Other than that, you will have to form your own opinion based on the pictures throughout the review. 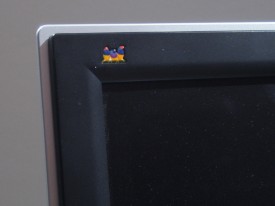 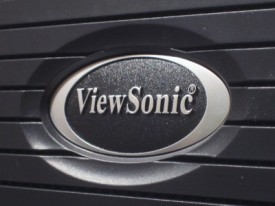 The monitor does not offer any surprises appearance-wise. A combination of black and silver meet in a relatively tall construction. I appreciate the black border around the screen, which eliminates the reflections in the plastic seen on some other monitors. Furthermore, we find a total of five buttons placed on the front, toward the user. This makes it easy to separate and reach them, while it might be a slight drawback in the design; it simply gives the monitor a little less neat impression. The monitor still feels more expensive than for example the Samsung 930BF which we’ve reviewed earlier; worth noting is the Viewsonic logo which is engraved in the front of the monitor, as opposed to the Samsung one which is just printed/painted on.

Viewsonic’s goal is not to build a super solid monitor. It’s more about compromising between good gaming performance and a reasonable price. The overall impression I’d say is slightly above average, with a few exceptions. First off, the plastic cover on the back used for concealing the cable connections. With the power, digital and analog cables all connected, it’s very difficult to get the cover to fit nicely, there’s simply not quite enough room for the cables. Perhaps one chooses to not use the cover at all and not have to care about this issue. Furthermore, as I mentioned earlier, there’s a slight feeling of frailty in the monitor when adjusting the tilt. But once the monitor is in place it gives a good feeling of quality.

Just like the monitors we’ve previously reviewed, this one is completely ”naked”, without USB ports, speakers or other goodies. With good and bad sides, of course. The only thing you can do with this monitor is remove the rear cover concealing the signal and power cables. 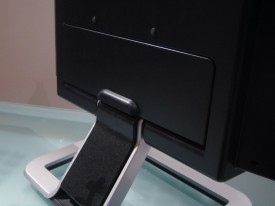 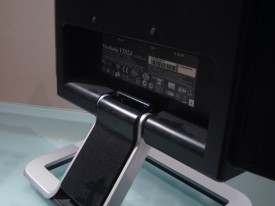 
The monitor has digital and analog inputs. The tests are mainly run with the digital connection, unless otherwise noted. The quality of the analog connection will be discussed later on in the review.

Hardware is of little importance when reviewing a monitor, whereas software can play a bigger role. Below are some specifications of the system.

I have chosen two classical games that will represent most of the things that a game can demand from a monitor, as well as a movie in HD format to ensure that the monitor gets to show its worth.

The following tests are meant to be as objective as possible and we will mostly use Nokia Monitor Test v1.0a. It’s a basic software that tests characteristics like brightness, contrast, convergence, colors, dead pixels and such.

The monitor’s brightness of 270 cd/m2 may look a bit low when you compare specifications, but it should be enough for most users. I expected the contrast to be a bit lower than the specified 550:1, but in fact, ViewSonic understated the value. Actually, the monitor has got rather good contrast characteristics – at least better than what’s specified.

Escaping light, or black level, isn’t the LCD technologies strongest side. When the screen is completely black, you can clearly see light is escaping at its edges. The black level isn’t that even either. A strange phenomenon is that the escaping light at the top of the screen is very clear when you look at it from above.

When you run this kind of test, the high dot pitch gets rid of the convergence errors. Anyway, in reality, this doesn’t matter to us normal users.

The monitor has a color depth of 6-bits and can show 16.2 million colors. I didn’t experience the colors as extraordinary, but they aren’t bad either.

The viewing angles are specified to 160° both horizontally and vertically. If you move sideways slightly, you begin to se saturation on the screen and the colors start acting weird. And when you look at it from 180° nothing else really happens. The overall impression is a bit below average, almost on the verge of failure. This is 2006 and I think you should expect more from a monitor in this price range, even if it’s aimed at gamers. Also, if you view the screen from a different angle than from the front, you get strange color changes. 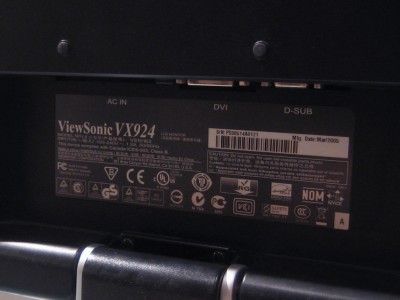 The following are subjective views on how I’ve experienced the monitor in a couple of different situations.

Just like the Samsung 930BF we tested earlier, this is a monitor with gamers as its biggest target group. The monitor’s got no problem at all keeping up with its low response time. Menus are also very well handled by this monitor – everything is sharp and neat. As expected, there is no fuss about gaming in other than the native resolution.

Obviously, a gamer monitor like this one has no problems keeping up. There are some very fast sequences in the game, especially when you hit a fast curve, there’s a lot of information passing, something the XC924 seem to have no problem handling. The menus contain a lot of details, some animated elements in backgrounds and text. Once again, there are no direct limitations with the monitor.

Low response time means you won’t have to suffer from ghosting in the movies, but on the other hand, that hasn’t been a very big problem on neither the 8ms nor the 12ms monitors. Colors, contrast and blackness are more important nowadays.

The film I chose this time is the last part of the Lord of the Rings trilogy, in HD format (720p). This movie’s got one of the best image qualities I’ve ever seen. The picture is not however experienced perfectly on the monitor. You never get that optimal setting between colors, contrast and lighting, in other words, it’s hard to find peace and balance in the picture. It’s possible to get the settings right for one at a time, but the overall feeling is suffering. Although, I don’t think this monitor was designed to be the ultimate film monitor, but instead, as I said before, a gamer monitor.

Like the Samsung 930BF, that we have reviewed earlier, ViewSonic’s VX924 is aimed at gamers. The monitor tries to attract you with its 3 ms response time, which really is 4,8 ms (black to black). I’m having a hard time getting an overall impression. 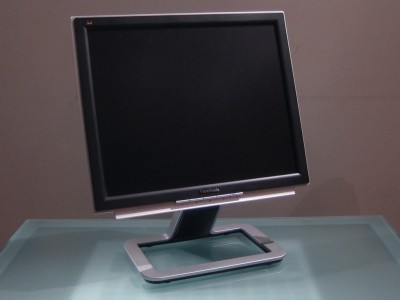 Today the monitor can be found at $320. Although there’s no problem finding a cheaper 19-inch monitor, you can’t call this monitor expensive. But what does this amount of money get you? It attracts you with its low response time and sure, you get that, but what you certainly don’t get is good viewing angles or good and even black levels.
Something I tried to imply when we looked at the Samsung 930BF was that the hysteria about low response times has gone too far and I still think so. I have no doubts that this monitor lives up to its specifications, but who needs these low response times? According to my tastes, I think these so-called gamer monitors looses too much of their other performance. Unfortunately, I believe that many will buy this monitor based on its specifications, when they probably could have found a better and cheaper monitor. An advice is that if possible, you should get your own opinion if this monitor suits your needs. Why not look at a more expensive 17-inch

I would like to thank Viewsonic who supplied the monitor and made this review possible. 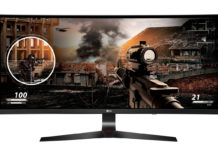 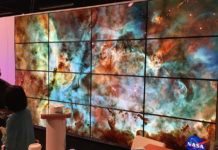 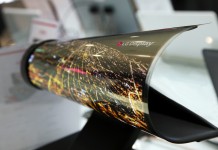