NZXT is a sleek miditower that aims to compete in the high-end segment with other cases we have reviewed in the past. Has NZXT done it’s homework and can it measure up?

NZXT first appeared as a company building extravagant cases for gamers, which to me at least means a lot plastic, LEDs and that sort of stuff. Over the years NZXT has evolved and is now beyond the blingy-flashy-thingy period and formed into a company that has on occasion presented close to brilliant cases. In all honesty the interiors of its early gamer cases was often very good, but it was easy to be mislead by the exterior as to think they were just another run of the mill ”gamer cases”.

Today we’re going to look at the NZXT Whisper, a case that fights in the same segment as Antec Performance One, Silverstone Temjin and the Lian-Li PC series. I’ve tested and used all of these in the past and have been much pleased with pretty much all of them, even if there have been an error or two with a few models they have been minor. Whisper is a sleek and kind of mysterious looking case. It lacks any real attention grabbing details, but still draws attention as a whole.

The exterior of NZXT Whisper may lack blingy details, but then the exterior is not meant to stand out, instead much of the focus is on the inside with loads of harddrive slots, good cooling and noise reducing solutions all around. On the following pages we will try to take a closer look at these details and how NZXT has managed to fit all of that inside of a case of regular size.

We begin with the specifications.

The version we’re looking at doesn’t have a power supply, but there are bundled options, which cost more of course. It’s up to you really if you want the 500W bundled or if you want to go for another power supply of your choice. The overall case dimensions are in the regular miditower range, perhaps a bit larger than some, and since it’s made from steel it’s also a bit on the heavy side, but not very. It’s sturdy and rigid.

NZXT sends along four fans, all installed from factory. It took some digging but we managed to find the specifications and have listed them below. You can of course replace the fans if you want, but the front 120mm blue LED fan will be a real pain to do so. It’s embedded into the front. The rear 120mm fan is attached as usual, as are the two smaller 80mm fans

Among the accessories we find seven small plastic bags of screws and one of them contains even more bags with screws. They should be enough even if you fill the case to the limit with hardware. It all comes in the black paper bag you see on the picture below. It also contains a manual, convenient cable snare, PC speaker and rubber support for the power supply. The manual passes grade and contains pretty much everything you need to know, including the important pin-layouts for the top ports.

On the next page we will look at the exterior.

The front of the case has a certain designer touch to it. The front is decorated by a side-ways triangle that hides bars behind it to let through air for better cooling. At the bottom you will find the front fan embedded. It will be a real pain to swap it for another model if you think this one is too loud, although I doubt you will. And there is always the possibility of running it at lower RPMs.

On the upper left picture of the front you see the power and HDD LEDs as well as the power switch. The button itself is a bit different from regular power buttons, but it works nicely and adds a unique touch to case. If you open the door you gain access to another, rather similar button that acts as the reset switch. Right next to it you will also notice the NZXT logotype and the slogan ”Crafted Gaming Armor”. There’s also the 3.5″ bracket that comes pre-installed in the top slot. I will not be using it since I stopped using floppies many years ago.

The side panels offer little details worth showing, at least on the outside; they are far more interesting on the inside. The matte black color spreads across both side panels with no interrupts. No windows, no mesh nets, nothing, just continuous black. Nice.

The back on the other hand has some nice features, although nothing we haven’t seen before. The power supply is located at the bottom inside the lower chamber with two 80mm fans helping the 120mm front fan to keep the air flowing. Above the two fans you see two small black holes with padding, they are for pulling water tubing through, but they are a bit narrow to be honest. They work, but they do feel narrow.

NZXT has chosen to go with fully covered brackets for the expansion card slots, instead of the pierced ones some manufacturers use. At the top is the hole for the I/O bracket for the motherboard, and for once it’s not occupied by a generic piece of metal you have to remove and throw away. Beside it is the rear 120mm fan, which is also the only case fan keeping the air flowing through the upper chamber.

The only things left are the top and bottom of the case, and the bottom offers nothing of interest really. Just four feet, while the top does have something of interest: a panel of connectors with USB, firewire and audio ports. The ports can be pushed down as seen on the shots of the side panels above. Then it’s barely noticeable.

We’re taking a look inside on the next page.

As with all NZXT cases the really fun doesn’t start until you get inside of them. Whisper lives up to the precursors with a bit to add. The two-chamber design is quite obvious, but unlike, for example, the Performance One series, the lower chamber has much more room and the power supply slides in easily. You can also fit a whole bunch of harddrives in there, nine to be exact. That means you could store up to 18TB of video, vacation pictures and random data providing you had the money.

One of the most interesting features from a noise perspective is the padding of either panel. NZXT has generously padded both the left and right panels with thick noise absorbing foam. On the lower right picture you can also see the holes for pulling cables from the power supply on the back of the motherboard bay.

The lower chamber is where you will find three of the four fans. On the lower left picture you can see the two 80mm fans that cool the four lateral harddrives, while on the lower right picture you don’t really see the 120mm fan, but it’s there behind the metal. It helps cool all of the harddrives but perhaps mainly the five in the front.

On the lower pictures you can inspect the back and front of the upper chamer. The picture of the rear mainly shows the 120mm exhaust fan and the metal brackets covering the expansion slots. There’s also a four columns of square ventilation holes. Where the motherboards goes you should see a white sticker. It holds valuable information on which holes you should put stand-offs in depending on the formfactor of your motherboard. On the lower left you see the front of the case, the many slots and the bunch of cables coming from the front of the case.

The picture below shows the sled you attach your harddrives to before you slide them into the many slots available.

Let’s move on to the conclusion.

NZXT Whisper is a high-end case with a quality and exclusive feel to it. There’s just no doubt about it. The tool-free design, something I’m not a big fan of in general due to all too many poor executions in the past, is quite decent here and the whole rigid feeling of the case makes me want it, and I aim to keep it. The front door has an excellent pass form and every little detail feels worked through, excluding the perhaps bit narrow water tubing holes on the back.

The case sports four fans from factory and they are optimized for silence, not maximum throughput, which is of course a good thing. What bothers me though is that the lower chamber has three fans for cooling the harddrives and the power supply, most people will perhaps only use two or three harddrives, while upper chamber has only one fan, where, again, most people will have a processor and graphics card that will generate a lot more heat. It seems a bit disproportionate, but then again both processor and graphics card have fans of their own, while harddrives do not, typically at least.

I like Whisper, there’s no denying it. I like the metal feel and it sports the features people would expect from a high-end case. It’s sleek and discrete, but still unique looking. The aesthetics makes me want to recommend this case to all users really, even the gamers since it does look a bit raw. The cooling potential is good, but you will perhaps want to go for non-reference cooling for both graphics card(s) and processor for best results, which on the other hand is true for practically all cases. The number of harddrive slots is outstanding.

Another thing we have to mention is the padded insides of the side panels. Those should really help to keep any noise from coming out. Overall Whisper comes warmly recommended, it’s a quality build, but we still wonder why there is no secondary fan for the upper chamber, but then again the crafty should be able to come up with something. The price is on par with other high-end cases, which leaves us no other choice than handing over our Editor’s Choice award. 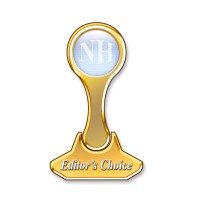 We want to thank Matt from Max Borges Agency, NZXT and PCB Distribution for making this review possible. 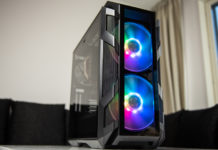 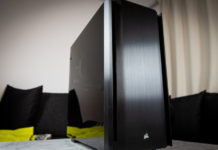 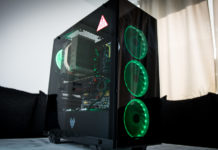