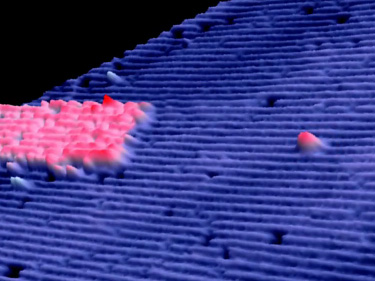 While new manufacturing technologies allows circuit makers to make smaller and smaller transistors, no one has managed to make the smallest imaginable transistor to work – a transistor in the form of a single atom. A group of scientists in Australia has presented such a transistor – for the first time fully functional.

The group stationed at University of New South Wales (UNSW) has succeeded where other have failed. The process is advanced, and builds on covering a silicon wafer with a coating of hydrogen atoms, then removing selected amtoms using a scanning tunneling microscope, more specifically in the form of angular lines around a rectangle in the middle the pattern. Add phosphine gas and heat to attach phosphor atoms to the silicon pattern, where only one atom sticks inside the rectangle  – and forms a transistor. The construction has been proved to work, without any major addressing faults or errors in placement. The transistors have been tested and the results have matched perfectly with theoretic data for how a single-atom transistor should behave.

What makes this extra interesting, beyond the technological achievement to individually position atoms and use them as transistores is that Moore’s law – that predicts the transistor size in electronics is halved every 18 months predicts that the major semiconductor manufacturers, like TSMC and Globalfoundries, is not expected to reach these levels until 2020. The technology is thus 8-10 years into the future. Whether the technology is practical enough to scale, making it possible to manufacture single-atom transistors on the same level as current transistors, remains to be seen, but the scientists believs that single-atom transistors are a big step toward working quantum computers, which uses the quantum data of atoms to make calculations.