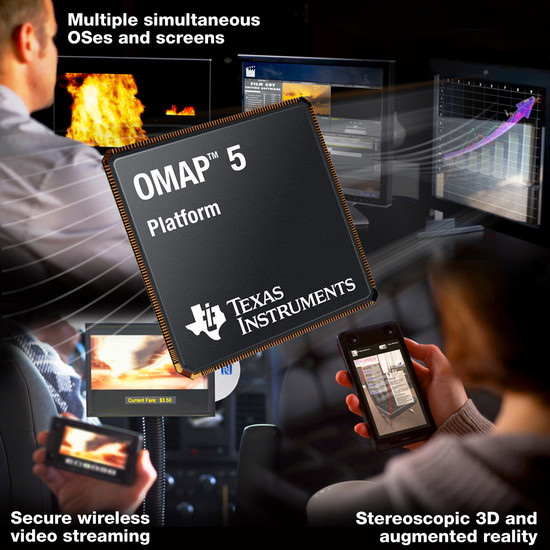 Texas Instruments is working on the next generation system processors and with its ARM license backing it up, it is the Cortex-A15 architecture that is used for OMAP5. It has now presented a dual-core OMAP5 SoC at 800 MHz that crushes a quad-core Tegra 3 at 1.3 GHz.

TI has published a video at YouTube that shows how two not-named Android tablets with an OMAP5 processor and a quad-core Cortex-A9 processor is forced through EEMBC’s BrowsingBench loading twenty different websites while playing MP3 files and downloading files in the background.

Most likely the OMAP5 tablet is simply a development platform and uses Android 3.x Honeycomb, while the combatannt is probably ASUS Transformer Prime with quad-core Tegra 3. The latter seems to use Android 4.0 Ice Cream Sandwich.

In the test we see how the Cortex-A15 based OMAP5 processor, despite half as many cores and much lower frequencies, crushes the Cortex-A9 based Tegra 3 processor. The OMAP5 tablet goes through the loading test in only 95 seconds, while Tegra 3 needed 201 seconds to perform the same tasks.

TI OMAP5 will house two powerful Cortex-A15 CPU cores, but also two more efficient Cortex-M4 cores, and a powerful PowerVR SGX544 MP2 GPU. The chip is made with 28 nanometer technology and will be available by the end of the year, but most likely early 2013. OMAP5 will scale to frequencies up to 2.0 GHz and support playback and recording of 1080p stereoskopic 3D and run 3D games.