LG presented its new OLED-TV during IFA 2010 in Berlin earlier this week. The record-thin TV has a profile of only 2.9mm and with a relatively large screen of 31″ one can’t help being impressed.

At Legitreviews they have published a shorter hands-on summary, which contains a lot of superlatives showering LG’s TV with praise, not just for the fantastic dimensions but also the superior features of the OLED technology; colors, contrast ratio, blackness and viewing angles. The OLED technology is still very expensive per square inch, but when we see pictures like these one can’t help being eager to see these models on the market.

Colours are also incredibly rich and vibrant yet black levels are, well, black. With no backlight to potentially bleed through and make blacks look grey, you can simultaneously have the strongest white and the blackest black right next to each other. We’ve no stats for this model but the 15in version had a stated contrast ratio of 10,000,000:1, which gives you some idea of just what we’re talking about.

Also worth mentioning is the passive 3D technology, not unique for this TV, but still interesting in spite of the low resolution.

LG is expected to start selling the 31″ OLED-TV within 6 months. The price hasn’t been revealed, but you can count on something record high. Especially considering the limited screen size. 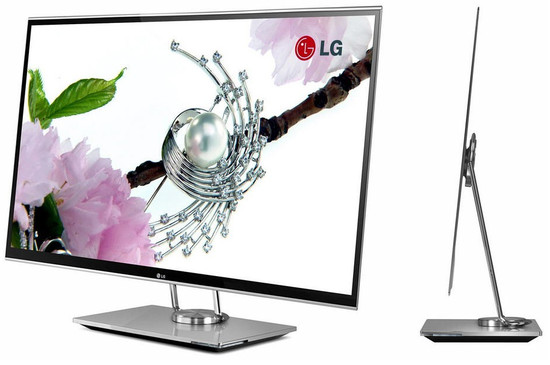