Japanese cooling maker Scythe has launched a new mode in the Mugen series; Mugen 4. Much like the competition Mugen has not only improved the cooling capabilities, but also simplified the mounting and slimmed down the design.

Cooling for desktops is not the blooming industry it was a few years ago, but there is still progress to be made. The Mugen series by Scythe has been around for long and are popular alternatives for heavy, air-cooled systems.

With the precursor Mugen 3 as a starting point Scythe has placed the fins more efficiently and the result is what it calls T-M.A.P.S., or Three-dimensional Multiple Airflow Pass-through Structure. In practice it means Scythe has restructured the cooler for better airflow and increased cooling performance. 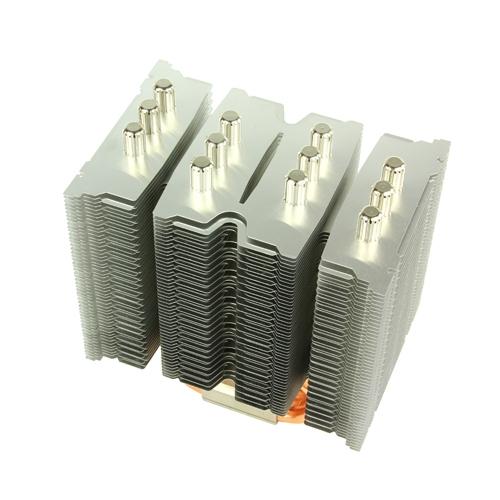 The increased cooling performance has allowed for more compact measurements, even if it is still in no way a cooler for the small formfactors. Mugen 4, or SCMG-4000, measures 130 x 88 x 156,45 millimeter and weighs 625 gram. The cooler is meant to be combined with a 120 millimeter fan, and Scythe sends along a PWM-version of Glide Stream.

Mugen 4 also comes with an updated motherboard mounting called H.P.M.S., which will be simpler to deal with than previous solutions, and the cooler mounts without the need to access the back of the motherboard. There is support for all current processor sockets from Intel and AMD, including the older from Intel: LGA 775, LGA 1366, LGA 1156 and all of AMD’s sockets from AM2 and forward.

The RRP of Scythe Mugen 4 is 36 euro. The unit should be in stores the coming week.