Sandy Bridge-E consumes up to 130 watt

Sandy Bridge-E is one of the world’s worst kept secrets. We have almost all cards on the table and the only thing missing is benchmarks. Now we also know the power consumption of the processors and they are as to be expected higher than Sandy Bridge and the LGA1155 platform.

According to a slide obtained by Donanimhaber Sandy Bridge-E comes with a TDP at 130W. The big question is if this applies to all processors? It is most likely for the hexa-core models, but we will also see a quad-core from intel that looks to get high frequencies. Even if Sandy Bridge-E lacks the integrated graphics processors it has an overall beefier architecture with four DDR3 memory channels and a large cache. Currently Intel LGA1366 only houses models with 130W TDP rating. 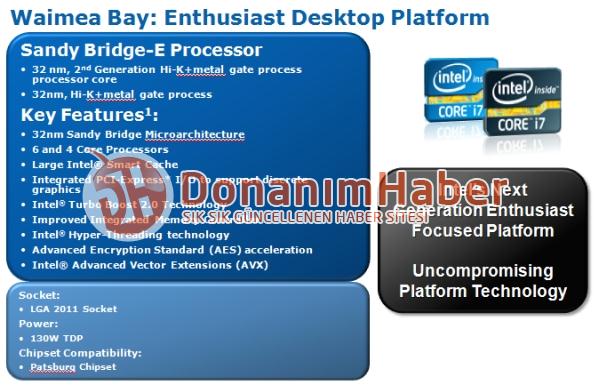 It will be interesting to see how this will play out and if we will see a more exciting battle than we have had over the last couple of years now that AMD Bulldozer is coming. Much of Intel’s prices and strategy will be affected by how well AMD has built its new architecture that sports up to 8 cores. AMD Bulldozer will introduce three models at 95W TDP with 4, 6 and 8 cores, while only 1 mode will be the top model with 8 cores and 125W TDP.