It looks as the Galaxy S III will be the most powerful Android smartphone on the market so far. Samsung’s next flag ship recently appeared in a result database at GLbenchmark.com where the smartphone sails past big devices like the HTC One X and One S in graphics performance.

Samsung will as we know equip their next smartphone flag ship with a quad-core system processor, and the Exynos 4412 should with a clock frequency at 1,4 GHz be one of the most powerful processors at the market today seen to CPU performance. The integrated graphics in the Exynos 4412 is still based at the competent, but today a little old, Mali-400MP graphics circuit. This worries alot of people regarding the smartphones graphics performance compared to the latest platform on the market, which they have all the right to be.

Although the performance numbers that has been leaked to GLBenchmarks website implies the we shouldn’t have to worry very much, and that Samsung just as Meizu has implied, that the GPU power has increased with up to 50 percent. This looks to be enough to bring every other Android platform back down to earth. 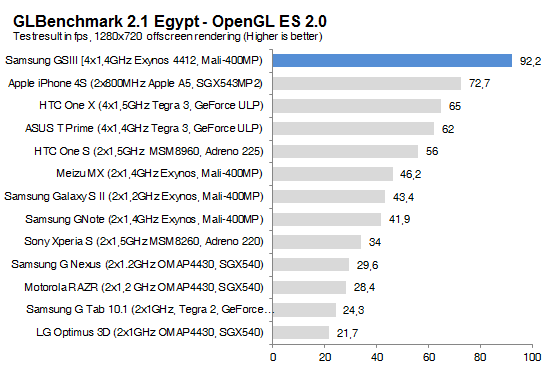 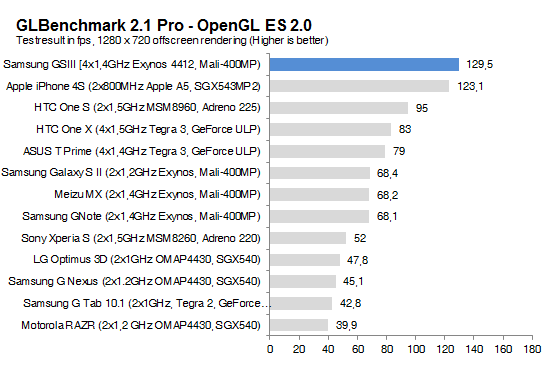 Both Nvidia’s quad-core system processor Tegra 3 and Qualcomm’s fresh Snapdragon S4 circuit will have to admit that they have been beaten by the Exynos 4412. And this with quite a bit to spare in both parts of the tests. Worth noticing though is that Apple’s new A5X processor, which isn’t included in these charts, is still a significantly more powerful graphics solution.

Samsung has chosen to wait with their next generations graphics circuit with the name of Mali-604T from ARM, and it looks like the Galaxy S III won’t have any problems to bring down the current competitors at the charts. But with a new generation of of iPhone’s just around the corner and Qualcomms continued work with the upgraded Snapdragon S4 Pro with its integrated graphics, the Adreno 320, we can look forward to a very exciting fall. The Samsung Galaxy S III is expected to be officially announced on May 3rd in London, and we will certainly be there to cover the event, and try to supply our readers with early information on the new smartphone.