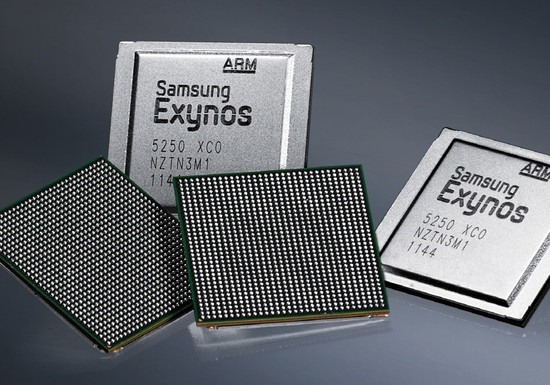 Samsung Exynos 5250 will be one of the first system processors sporting ARM’s new processor architecture Cortex-A15. Samsung revealed during a conference call today that it has started test manufacturing of the new 32nm chip.

Samsung says the new processor sporting two CPU cores at 2.0GHz will go into mass production in Q2. This means the circuit will find its way onto the market in Q3 or Q4, about the same time as Qualcomm’s new Krait architecture and Snapdragon S4 platform.

Samsung will be making Exynos 5250 on its own and decides to stick to 32 nanometer technology, which could give them a headstart on other competing products sporting the Cortex-A15 architecture. Exynos 5250 will with its new architecture and tweaked frequencies be twice as powerful as the current Exynos 4210 at 1.5 GHz and the integrated graphics core will be 4 times faster says Samsung. The circuit will sport 12.8 GB/s bandwidth and capable of powering displays up to 2560 x 1600 pixel resolution, which should fit well with the next generation tablets.

Exactly which graphics circuit Samsung has decided to use in its system processor was not revealed. It uses Mali-400MP in the current Exynos 4210 and ARM claims that the next generation Mali-T604 will be up to 5 times faster, which means it could be Mali-T604 that is found inside the coming chip. Although, Samsung also works with Imagine Technologies that made the PowerVR graphics circuit for Hummingbird. Either way, Samsung Exynos 5250 will have a much more powerful GPU than the system processors available today.

Samsung has set the sight on tablets mainly, but we would not be surprised if also smartphones gets to take on the new system processor later this year. Perhaps even the coming flagship Galaxy S III that is rumored to appear at Mobile World Congress next month.