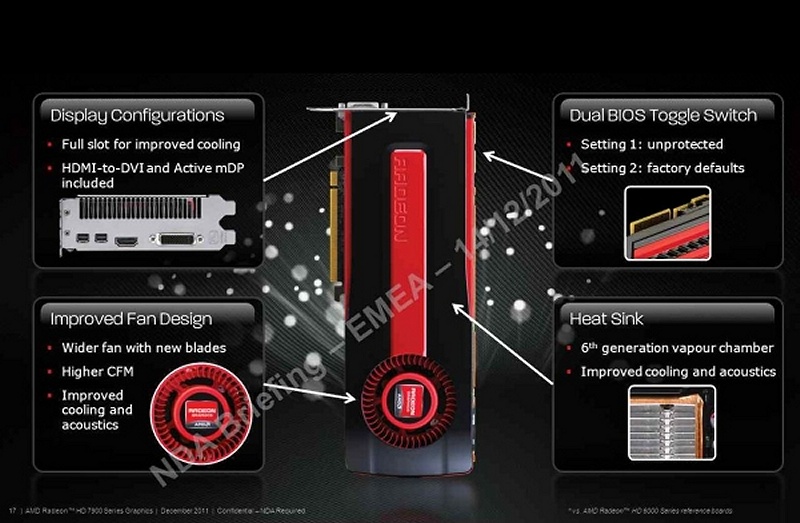 The launch of AMD’s next flagship will be based on TSMC’s fresh manufacturing technology at 28nm is just around the corner, and an engineering sample of HD 7970 has been dissected and put before the camera for evaluation.

Radeon HD 7970 launches tomorrow with a whole new archtiecture from AMD and manufacturing technology from TSMC. The first pictures of the card is of an engineering samples that may gone through some minor changes before it hits the market. The circuit board is not red but black according to TechPowerUp, and will sport one 8-pin and one 6-pin connector for power and not two 6-pin.

The GPU will have a different packaging than we’re used to since it is more or less framed. This will be to stabilize the pressure from the cooler and spread it evenly. As we already know the card will sport twelve memory circuits, connected to a 384-bit memory bus, that will offer 50 percent higher bandwidth than HD 6970. An interesting detail is that the card will get a small BIOS switch that can switch between two BIOS EEPROM chips.

The card also has one DVI, one HDMI and two DisplayPort outputs. The cooler AMD has installed is hardly the smallest we’ve seen and use Vapor Chamber technology that is found with older cards from the company. The card has a curvy plastic that hides all the goodies and is just a design thing.