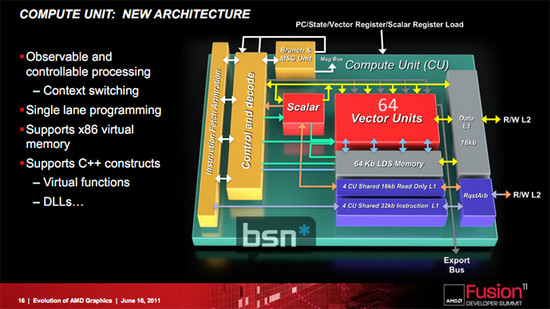 Next week AMD is expected to host events in several countries to discuss and present the new Radeon HD 7000 series. Only the HD 7900 series gets the new GCN architecture, while the rest will be built on AMD’s VLIW4 architecture that is used in Cayman.

There is now a month to go before the launch of the world’s first 28nm GPU, and AMD is preparing several press events around the world. The first, very precise details has now surfaced and basically the whole family has been uncovered. Unlike earlier stories it seems like AMD will being at the top and launch the GCN architecture and Tahiti circuit first.

But before we get to that AMD’s lower segments look almost as interesting. The move to 28nm has enabled more room for energy efficient circuits and twice as many transistors to play with. The HD 7800 series will be built on Pitcairn, which is a shrink of Cayman, upgraded with and performance performance optimized. The price for the HD 7800 series is expected to land around 199 – 249 dollar, and become the direct successor to HD 6850 and HD 6870.

HD 7500, 7600 and 7700 gets to share the same graphics circuits, Cape Verde. Cape Verde is based on Cayman and gets a VLIW4 architecture, but slightly reduced. Possible performance is hard to predict or even speculate, but it is likely that Cape Verde will be on the same level as the HD 6800 series with all goodies activated.

AMD continues with its APU concept. There is no mention of graphics cards in the lower segments but here the Trinity APU is supposed to cover up. Besides Piledriver ”improved Bulldozer”-cores, the graphics will be built on the exact same VLIW4 architecture as the HD 7000 series. The graphics core is code-named Devastator and will be called HD 7450D and HD 7550D. 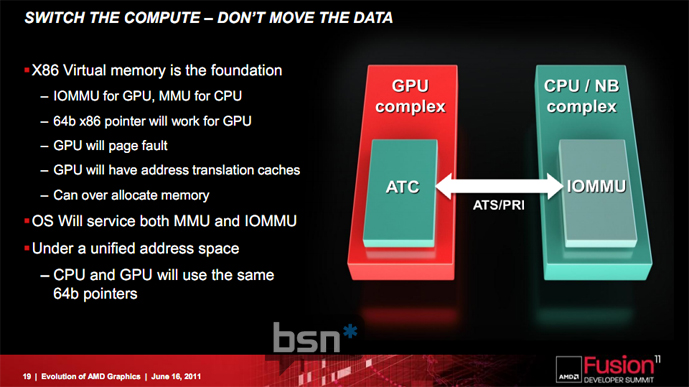 The new GCN architecture offers many new innovations, and AMD’s big goal is GPGPU calculations. The GCN architecture is fully IOMMU functional and also fully compatible with 64-bit x86 memory handling. This will be the key for 2013, says BSN*, for the APU that will replace Trinity, and for CPU and GPU to be able to work even closer. Its professional FireStream series will make use of this in 2012 already. The advantage of the technology is mainly that processor and graphics card can use data saved in the each memory, instead of having to copy it.

With the GCN architecture AMD continues the work on the FSA (Fusion System Architecture), where the goal is bring CPU and GPU closer together. An important part of this is memory handling, but also to use the same programming languages and tools. GCN for AMD is a step closer to the vision it hopes to have achieved in 2014.

AMD is transitioning to a new way of thinking with its Compute Unit, which sports 64 Vector Units. These Vectur Units will be marketed as the new Radeon cores. The company has equipped GCN with a real cache structure where each unit gets 48 KB L1 that is shared between four Compute Units and 16 KB L1 Data, 64 KB LDS cache that is dedicated to each Compute Unit. Each Compute Unit is then connected to each other using 64 KB dedicated L2 cache. In total the circuit gets 4992 KB (4,875 MB) cache. 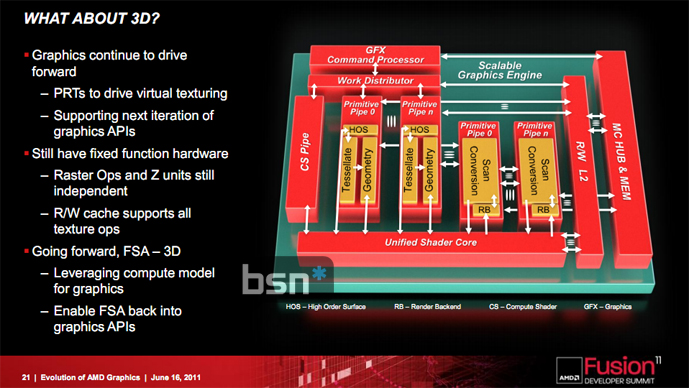 Over to the specifications, the GCN architecture will be introduced with Tahiti and HD 7900 series. In its most powerful shape it gets 32 Compute Units, 2 048 Radeon cores and 384-bit memory bus. This is also where we will see the world’s first graphics card the launches at the magic 1 000 MHz as default.

The nunmber of ROPs has doubled from Cayman, and the texture units are up from 96 to 128 with Tahiti. It doesn’t say what kind of power consumption HD 7950 or HD 7970 will get, but HD 7990 will use two full Tahiti circuits. The clock frequencies will be around the two graphics cards it is based on. The performance to expect from the new graphics cards is impossible to say, but the increased number of ROPs, texture units and memory bus is a hint of what we can expect in January.