Intel’s first Westmere processors were unleashed about a month ago. Clarkdale for desktops and Arrandale for notebooks. During yesterday’s conference call Intel revealed additional bits and pieces on its latest processor architecture and high up on the list of priorities was new moves to lower power consumption, something that is getting more important for each.

As our processors grow new cores the maximal power consumption at a given clock frequency increases, but with the Nehalem architecture Intel started experimenting with Power Gate technology, where idling cores could be turned off by restricting the current to that particular part of the processor.

With Westmere Intel has taken the Power Gate Un-Core technology to the next level as it can also shut down the L3 cache, which wasn’t possible with Nehalem. Whether this will be something used exclusively with notebook CPUs we don’t know, but with hexa-core Westmere processors around the corner power saving features are much welcomed. 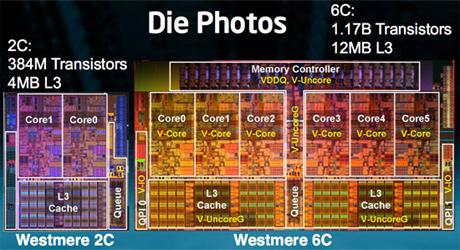 The hexa-core Gulftown processor aside, Intel has confirmed that there will be quad-core Westmere processors. Exactly where these quad-core Westmeres will slide in we don’t know, but servers feels like a given and we hope that desktop versions will appear too.

An interesting slide from Intel’s presentation hits that it will also support dual desktop processors with Westmere. This was hinted pretty clearly by EVGA’s work on an enthusiast motherboard with dual LGA 1366 sockets. Should Intel release a new Skulltrail platform we presume it will be with its Extreme Edition processors (I.e. Gulftown) paired with chipsets from the server platform. 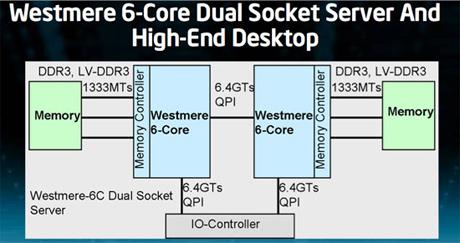