The last month or so have been heavy on the rumors around AMD and the coming Phenom II X6 family. AMD will launch everything on April 26th if nothing new happens and with a new Turbo technology and optimized 45 nanometer manufacturing process it is a pretty exciting solution. As it turns out AMD has additional plans for the hexa-core Thuban core.

According to sources to Siliconmadness AMD’s previously leaked Phenom II X4 ”T” series (Zosma) will be built on the Thuban core. Thuban, that in turns builds on Istanbul, has six physical cores and this would mean that the Phenom II X4 T series has two disabled cores. 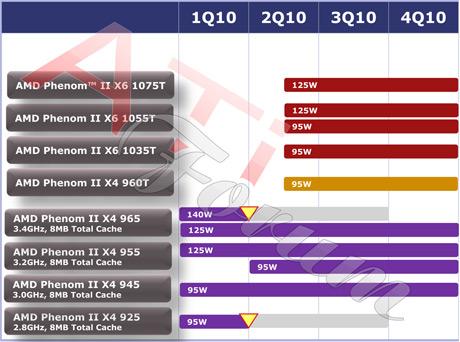 If this is correct it means that we are in a completely new situation for nifty enthusiasts where a quad-core processor all of a sudden can become a hexa-core ditto.

Since the Phenom II X4 T series is based on the Thuban cores it sports Turbo technology and most likely the full 9MB cache when unlocked (3MB + 6MB).

The first two models of the series, Phenom II X4 960T and 940T, will operate at 3.3GHz and 3.0GHz respectively. The processors will launch as the replacements for the current quad-core flagship Phenom II X4 965 Black Edition and in the 95W envelope.

We haven’t been able to confirm that the Phenom II X4 T series is truly based on the Thuban core, but it sure looks like it and we’re very eager to see what will happen when one of these find its way into the hands of ingenious overclockers and tweakers.