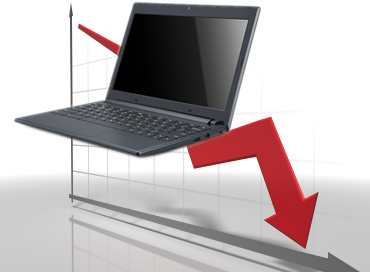 Analysts and retailers agree, PC sales are not what they should be and despite an usually strong period during the Christmas shopping the last quarter has so far been a disappointment for the PC market, a development that is expected to continue in 2012.

Market analysts at iSuppli have in December sent out a new and revised prognosis for PC sales in Q4 and 2012. The new prognosis shows that an uncertain climate and the floods in Thailand have had substantial consequences, something retailers have confirmed to NordicHardware.

An anonymous contact at one of the bigger computer sellers in the Nordic region has said that the Christmas shoppings have been a lot worse than last year, something the company believes is largely due to the lack of harddrives, which affects retailer in much higher degree than PC builders. It also mentions the ongoing financial crisis as a contributing factor. 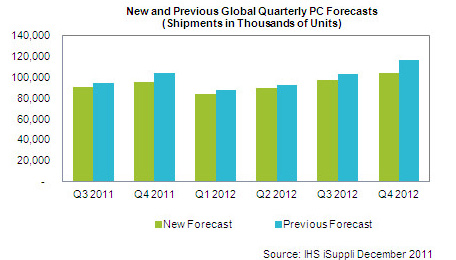 According to iSuppli the sales of PCs have dropped dramatically since Q4 2011 and will continue to be lower than previsou prognosis for the whole of 2012. For the first quarter sales will be 84.2 million computers, compared to the previously predicted 88 million. In total the PC sales will increase by 6.8 percent over 2011, to 376 million. This is worse than the improvement of 9.8 percent and 399 million shipped PCs, which was predicted in the last prognosis.

The lack of harddrives is expected to contine up until at least Q3 2012, and best case scenario we hope to see a surplus in Q4. This should not affect PC sales to any major degree that are still expected to be lower than earlier predicted during all four quarters.