To many enthusiasts SSDs is a given, but the price is still a problem for many. We have seen many hybrid solutions, most notable Seagate Momentus XT and Intel Smart Response with the Z68 chipset that uses a SSD for cache. OCZ has now released its own solution, with bundled software.

SSDs are still very expensive compared to regular harddrives. Even if the speed is what you pay for. The prices are not coming down at the speed many was hoping, and OCZ looks to adopt hybrid solutions in all shapes. OCZ RevoDrive Hybrid is a solution that is already in stores, and next in line is the new Synapse Cache series, with a different solution.

What makes Synapse Cache different is the software from Dataplex that makes it possible to use the SSD as cache for a harddrive as long as the computer has SATA ports. There is no requirement for Intel Z68, or any other hardware to use this hybrid solution.

”The industry has shown that it craves the performance advantages that SSDs provide, however, many users still value the high capacities associated with HDDs,” said Tobias Brinkmann, Director of Product Management, OCZ Technology Group. ”We see the Synapse Cache SSDs integrated with Dataplex™ software as a big win for a large number of customers who value SSD performance but still require HDD capacity. We are proud to be the first to offer this no-compromise approach to enabling high-performance and high-capacity storage for virtually any PC platform.” 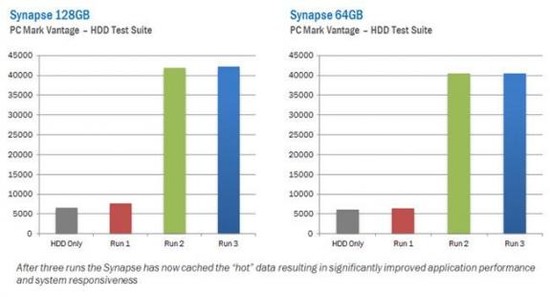 The principle is the same as other solutions that we’ve seen. As soon as you use the same file a number of times it is stores on the SSD for that ultra-quick response. With time the SSD will learn your manners and have the most frequently accessed files ready and loaded for your convenience.

OCZ Synapse SSD will ship today, and OCZ backs it up with three year warranty.