Nvidia Geforce GTX 465 is expected to launch during Computex, but already the first review is out. At X-bit Labs they have tested the new card and ran it through six different game tests to get a better picture of what consumers can expect from the new entry card of the Geforce GTX 400 family. The specifications that were revealed to be 352 CUDA processors, 32 ROPs and 44 texture units stands. This together with a narrow 256-bit memory bus and relatively slow GDDR5 memories puts the GTX 465 in a tight spot.

Since the card sports the same GPU and shader clock frequencies as big brother GTX 470 (607/1 215 MHz) and considerably lower memory clock, 3,208 MHz, there are no real advantages in raw strength, which is clearly shown by Xbit Labs’ tests. 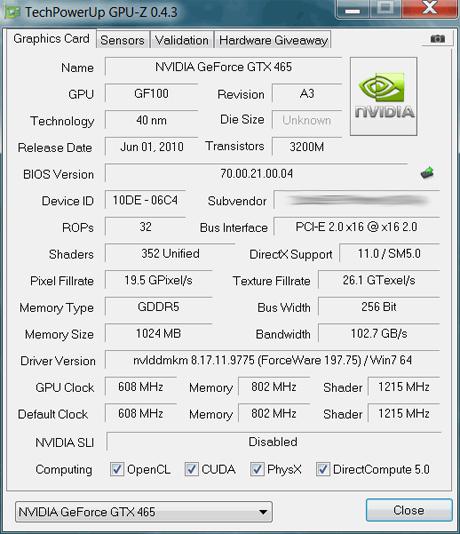 The card has a recommended price of 275 USD and should be around $10 cheaper than AMD Radeon HD 5850. The problems is that it is consistently worse than HD 5850 and actually more on par with the much cheaper last generation GeForce GTX 275.

GeForce GTX 465 has little to offer when DirectX 11 comes into play, or more advanced tessellation effects for that matter. Overall we have a hard time imagining anyone would want this at the price Nvidia is asking.

We should say that GeForce GTX 465 hasn’t been officially released yet and that drivers could improve performance, but you have to realize that the card is made from GF100 GPUs that didn’t make the cut for GTX 470 or GTX 480, which isn’t really the best to begin with. 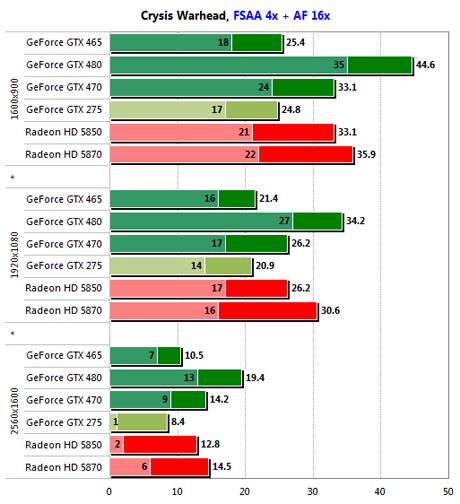