As we close in on the theoretic limitations of silicon prices will increase exponentially. NVIDIA now says 20 nanometer at TSMC will hardly be cheaper than 28 nanometer, and the same goes for the successor at 14 nanometer.

The cost for new technologies and manufacturing in the semiconductor industry will only go from here. Earlier there was an idea of a breaking point, where we will have to reconsider if it is worthhile to move on to a new node, rather than trying to optimize for the one you are on. NVIDIA has openly commented on the issue and its manufacturing partner since many years, TSMC, gets harsh critique. 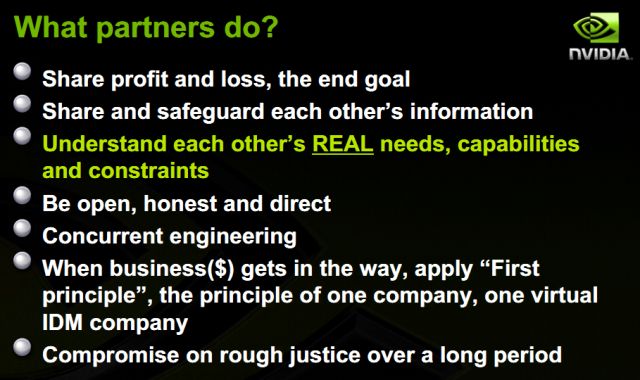 TSMC is the world’s largest foundry, which manufactures circuits for most companies that you can think of in the semiconductor industry. NVIDIA says that its partners will share wins and losses, and be open and honest when doing business. This sounds like NVIDIA is displeased with something that has been going on behind closed doors, but we get a better picture when look at the cost of manufacturing with future technologies. 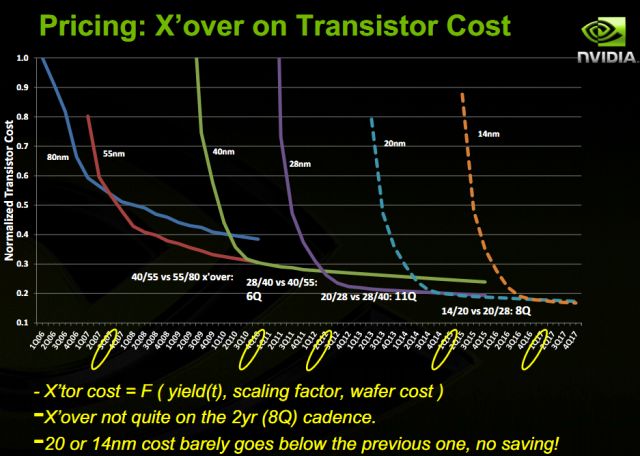 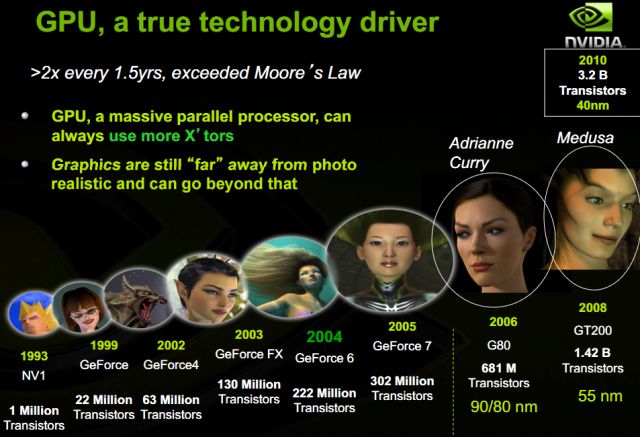 Imagine a new graphics circuit, where the transistor price remains the same… 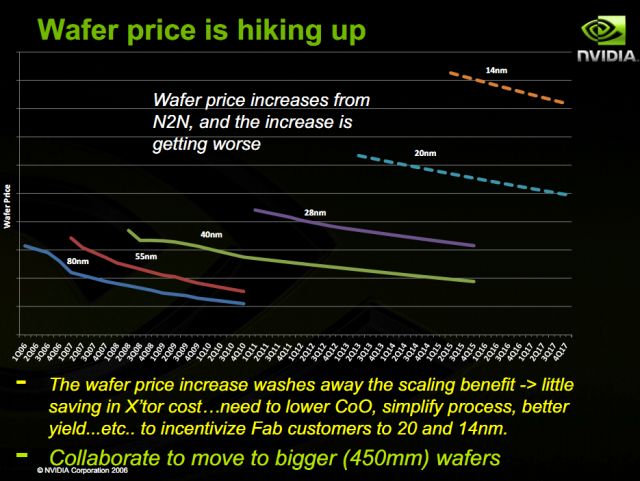 The exponential increase in price there has been talk about shows quite clearly when you look at the price per wafer. Even if NVIDIA has not stated any exact prices the diagram is pretty clear. TSMC will have to work closer together with its partners in the future, and NVIDIA urges for a better cooperation to move over to 450 millimeter wafers soon. This would boost the area from the current 300 millimeter wafers with 125 percent, which would of course result in lower production costs in the long run. The problem is that the new wafer size demands whole new equipment in the fabs, which will require enormous investments from TSMC.

It is very rare for a company to openly critisize its manufacturing partners, and there are rumors that NVIDIA wants to work with GlobalFoundries in the future. The cost problems are not isolated to TSMC, but should apply to all actors in the semiconductor industry. At smaller nodes technologies like Double Patterning, EUV will become essential, while things like FinFET and SOI will also be required to keep leakage at an acceptable level, which in turn will drive up costs even further.

Also the design for actors like NVIDIA will become a lot more complicated and the validation periods will be much longer, which in turn leads to lower ROI (Return on Investment). In combination with lower yields it is a fact that newer manufacturing technologies will become more expensive for a foundry customer, and thus also the end user. 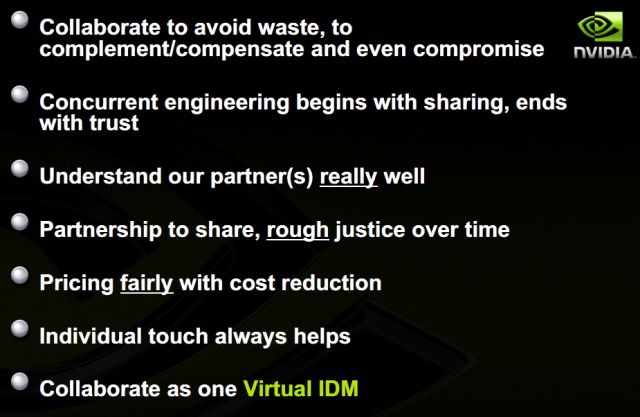 Also AMD have made similar statements, but it did not pinpoint or blame TSMC or GlobalFoundries. Newer technologies are not as attractive as before and AMD’s new VP Rory Read have made it clear for analysts that the company will not stress over to new nodes because of the costs. Together with a low capacity at TSMC’s 28 nm node the Deccan platform that was supposed to replace Brazos was skipped in favor of the coming Brazos 2.0.

It is rare for a company to openly critisize manufacturing partners like NVIDIA has done, but it shows that new manufacturing technologies will be anything but easy to develop and design for. The rule that smaller nodes will be cheaper will no longer apply, if you don’t have your own fabs and are selling enormous quantites, like Intel and Samsung. Intel has even opened its doors for others to use available capacities to make chips, which is just another way for it to keep the fabs working at maximum capacity.

nvidia has never been known to hold back it’s punches (and be very public about it). But to most of us, the problems associated with such small transistors shouldn’t be new news. Topics like Transistor leakage, price to performance, and price per wafer have been around for a while. We need to face the fact that we are not going to see the performance increases we are used to out of transistors. Just a thought, being as big as nvidia is, why don’t they buy global, and make whatever die they want? instead of dealing with a company they have… Läs hela »

this explains why the want Intel as their fab.

”We need to face the fact that we are not going to see the performance increases we are used to out of transistors.” That’s not necessarily true. It just might mean we get cards that are 30-40% faster being released every 8-9 months as opposed to having 70-80% boost all in 1 shot as has been in the past. GK110 (GTX685) can still come out later this year. Also, if you overclock HD7970 to 1200mhz, that’s easily 80% faster than HD6970. The main takeaway from this article for me is that the high-costs of new node shrinks will have to… Läs hela »

Wow, I am loving the feedback on our english site! I would agree it is a fact we must face. We can always up clock frequencies, but then we run into the issue of higher power consumption something everyone is doing their hardest to work against. 20nm will be a breaking point in our industry, so what NVIDIA states also explains Rory Reads statement that AMD won’t rush to new process nodes anymore. Power leakage will continue to get even worse for every new node as long as we use silicon, the issue is rising exponentially. That the price of… Läs hela »

i had a thought, couldnt GPUs use Intel’s 3D trigate tech? This would explain Nvidia’s quest for Intel’s fab more.

Of course that is possible, but Intel are having the exact same issues as everyone else. FinFET (3D/trigate) is part of raising the costs further of manufacturer, but it’s an evil must to keep leakage under control.

Intel is on the cutting edge when it comes to manufacturing, I would be very surprised if they were cheaper than say TSMC.

I don’t think Intel wants to become a fab and manufacture for its competitors. With Intel desperately trying to make competitive tablet and smartphone chips, the last thing they’d want to do is let Nvidia, Qualcomm, etc. use their advanced manufacturing facilities. Actually, I would even go as far as to say that Intel’s manufacturing lead in nodes in the industry is one of its key competitive advantages. Jacob, if 20 and 14nm wafers will continue to rise in cost, what do you think will happen? Imho, it’s doubtful that a company such as Nvidia will take a hit to… Läs hela »

Speaking of Intel, they have already doubled their CapEx to 12,5 billions from previous year and increased their R&D to 10,1 billion, a 21% increase. So obviously even Intel are feeling the effects. I agree that it’s doubtful NVIDIA (and for the matter anyone) are willing to take a hit on their profit margins. I would speculate they will extend the lifetime of their products a bit, and also couple it with a few rebrands/refreshes. In the end I am not sure what will happen now, but I will follow this development closely. But I won’t expect everyone and their… Läs hela »

So I guess technological progress is slowing down due to cost.
On the other hand, consumers won’t have outdated graphics card as fast as it used to be.

I feel like this is happening to all forms of technology. Like Apple releasing the IPhone5. The improvements/performance to thenew phone seem be decreasing marginally phone after phone Iphone 4s iphone 4, etc.

Seems like the technological age in advancement is slowing down.
20 Years ago we were using technology that looks ancient in today’s standard.