Since the launch of the energy efficient Brazos platform the company has moved from using product names to only code names and relying on the Vision brand. There are now two new prefix to consider that will be used with coming AMD products and one of them snuck out on the market without even having a proper name.

At the launch of Brazos, AMD’s Fusion APUs had to rely on a letter, either E or C that was then followed by three, or two, numbers. The E series was Zacate with a TDP at 18W, while the C series was Ontario with a TDP at 9W. Many who hasn’t kept their eyes open at all times may be under the illusion that AMD lacks a plan for tablets, but the company has every intention of grabbing a share of the market.

The current APUs of the E and C series are Bx stepping, but a C0 is on the way and is already available to partners. The new C0 stepping will make sure that AMD can bring forth 5W versions and the models at 5W will get the letter T s prefix followed by 2-3 numbers. The T probably stands for Tablet since these circuits are intended for tablets and lack many of the I/O functions of the C and E series. We know that Acer Iconia Tab W500 already houses a 5W version that was dubbed smething like C-50 Special or Tablet Edition, but actualy it doesn’t have a proper name yet. The next letter will not come as a surprise to most and it is the one intended to be used with Llano, namely A. We know that all models for Llano will start with A and then four numbers and eventually a letter in the end depending on the model. This can now be considered official and we can assume that the models previously slated to appear in July will do so since Semiaccurate has acquired a slide from AMD where it divulges the the A series. 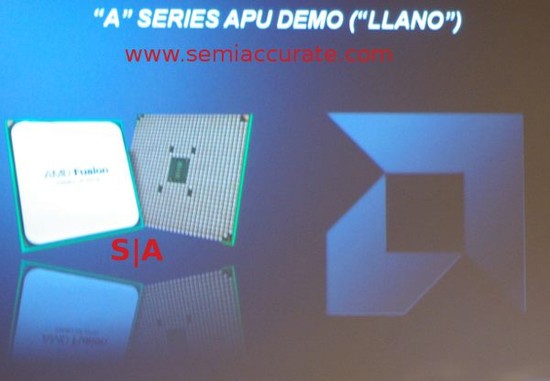 To summarize everything below you will find the current and coming line-up from AMD up until the end of the year when it will announce its new energy efficient APUs at 28nm: