During a pre-Computex event in the Netherlands MSI decided to confirm the existence of a third member of the Nvidia Geforce GTX 400 series. Geforce GTX 465 was mentioned in a product presentation where it discussed the new series of GeForce GTX 400 cards. The cards will sport a highly efficient Twin Frozr II cooler that is expected to lower temperatures and hopefully improve overclocking potential.

MSI did not release any specific details, but it is without doubt that GeForce GTX 465 is coming and that we will most likely get more information during Computex next week. MSI has great plans for the card at least. 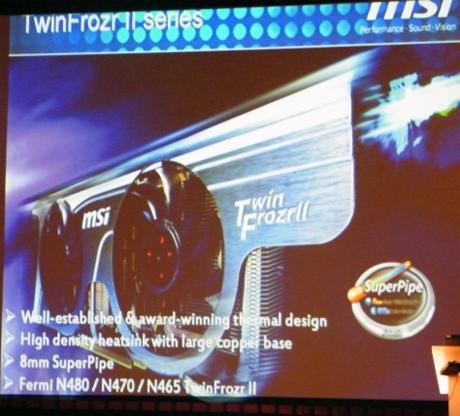