ARMADA 628 looks to become one of the most powerful mobile processor circuits this year. Marvell has released the official specifications for the triple-core ARM processor that will operate at 1.5 GHz and support playback of 1080p video in 3D and SuperSpeed USB 3.0.

Marvell hasnät held back when developing ARMADA 628 SoC whose three cores is based on the ARM v7 MP architecture. Interestingly there are two main cores operating at 1.5 GHz while the third core is intended to be used when you need minimal performance and spare the battery. The third core namely operates at 624 MHz and makes it a heterogeneous multi-core circuits.

The architecture is analogous to a hybrid muscle car. The ARMADA 628 is intended to perform like a race car engine on demand, while still delivering the frugal gas-mileage of a hybrid automobile. In real world terms, this enables the ARMADA 628 to play more than 10 hours of full 1080p HD video or 140 hours of music on a single charge while still providing 3 GHz of raw computational horsepower.

The three cores share 1MB L2 cache, LP-DDR2 or DDR3 memory up to 533 MHz frequency and backed by a graphics circuit with four shader units for performance up to 200 MT/s, which can be compared to Qualcomm Snapdragon (Nexus One, Desire) with 22 MT/s or the 90MT/s of Samsung Hummingbird (Galaxy S, Galaxy Tab). 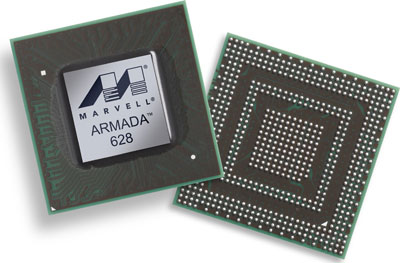 With this high theoretic performance ARMADA 628 not only offers playback of 1080p video, but can even do 3D video at the same resolution, which requires twice the performance (one frame per eye).

Marvell ARMADA 628 looks like a real monster of a SoC and we are starting to run out of superlatives for the development of ultramobile processors where we will be seeing smartphones and tablets with near endless uses soon.

Marvell says that ARMADA 628 is available to partners, but when we will see phones and tablets with this SoC remains to be seen, but sometime next year feels like a given.