Flexible panels have been on display many times at various events, but now LG has announced that it will start mass producing flexible OLED panels – and implement these – before the end of the year.

Frank Lee, LG spokesperson, confirms in an interview with Korea Times that LG Display has completed its research on flexible OLED panels and samples have been sent to partners, including LG Electronics that makes the TVs and mobile phones branded LG. Flexible OLED panels are sought after in the industry partly for making flexible end-user products and partly because they are very hard to crack. 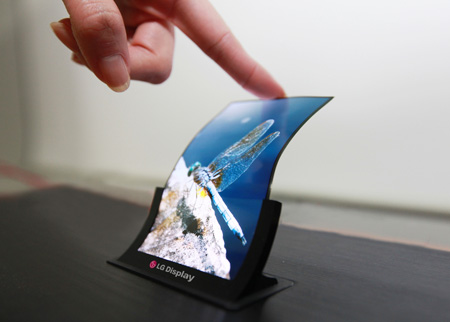 Mass production will start in Q4, which means we might see products sporting these panels before the end of the year and to a higher degree in 2014. The panels will be used in LG’s own smartphones, even if we don’t know the exact models, but also in various models from other companies that uses LG panels, e.g. Apple.

The production of flexible OLED panels could become an ace up the sleeve in the competition with Samsung, that according to sources is having problems with its flexible displays. There are tensions between the companies when it comes to OLED, not the least after Samsung accused LG for stealing and leaking Samsung OLED technology last year.