Intel will invest 3.1 billion transistors in the latest server processor in the Poulson family. The processor giant presented the new Itanium grade server processor, code-named Poulson, at ISSCC as the biggest upgrade of Itanium ever. The specifications include 8 CPU cores and 54MB cache.

Poulson will be made with 32 nanometer technology and means that Intel will actually skip the 45nm node altogether with the Itanium family. The latest update for the server platform came with Tukwila that launch in February of last year and it used 65nm technology with 24MB cache and was made from more than 2 billion transistors.

Poulson can with its considerably more efficient manufacturing technology more than double the already impressive cache to 54MB and increase the number of transistors to 3.1 billion, without making the new Itanium chip physically lather than the precursor.

Poulson will use the same Itanium 9300 platform as current Itanium system and will be more stable, reliable and accessible than Tukwila. Even though Poulson doubles the number of executed instructions per cycle (12 vs. 6 in current generation) it did not want to discuss performance just yet. Even if we can expect significant performance boosts, with the right compiler – a key component of the Itanium architecture – power consumption has also been substantially optimized. 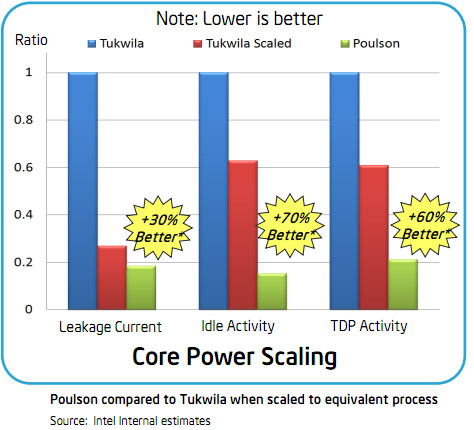 The launch date for the Poulson family is uncertain, but prices will start around $1,000 for the entry models and land well over $3,000 for the flagship.