Intel's 22nm node with 3D transistores gets a new customer 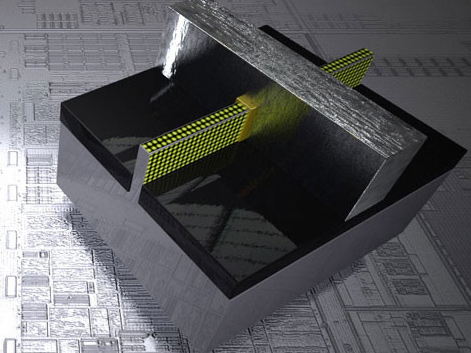 Intel has started to show an interest in opening up its plants to other companies. It has now been confirmed that another company will become an Intel customer when the new 22nm technology is introduced in early April, namely the FPGA company Tabula.

Tabula develops programmable circuits for various network products like routers, switches and other products needed in infrastructures. With the rise in demand for high bandwidth where the new 100 Gigabit Ethernet standard is starting to become more commoon traditional FPGA circuits (field-programmable gate array) has run into performance bottlenecks.

To get past these limitations, among others in transfers between memory and I/O ports, Tabula has developed its Spacetime architecture with shorter data paths and the possibility to use the same clock frequency for the most important components in the circuit – the logics, DSP, memory and data buses.

Tabula says that Intel’s 22nm node and its new 3D transistors are perfect for making its new and advanced network circuits, which also use a third dimension to minimize the number of components needed in the circuits.

Intel Custom Foundry and Tabula Inc. have signed a deal where Tabula can make its new 3PLD circuits with Intel’s 22nm technology, which it believes will give them advantage over the competition.

”Intel’s revolutionary manufacturing technology breakthrough employing 3-D Tri-Gate transistors at the 22 nm process node will provide our company with a head start of several years, much as Intel achieved in 2007 by introducing high-k metal-gate (HKMG) transistors at the 45 nm node.” commented Tabula VP Daniel Gitlin. ”We believe this breakthrough will extend Tabula’s Spacetime technology lead further beyond the rest of the programmable logic industry.”

Intel is used to making only its own microprocessors and chipset, but this is a great way of learning more about other forms of chip manufacturing. This fits well with its broader roadmaps where we have seen everything from microprocessors to integrated WiFi chips and an overall larger focus on SoC with lots of functionality baked in.

Intel already has a deal with FPGA maker Achronix for making circuits with its new 22nm technology and it is discussing with more companies to make similar deals.