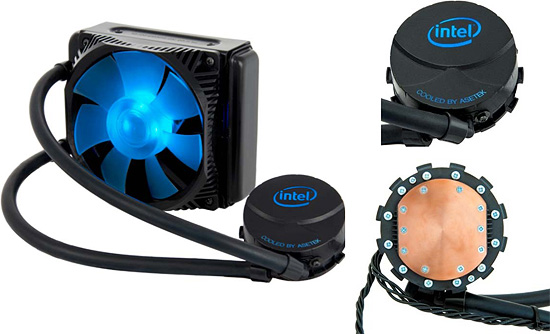 Earlier on we were led to believe that Intel would ship the new 3000 series Sandy Bridge-E without coolers. This was not correct, but unlike previously it will not be a lump of metal that is shipped with the most expensive and best processors. It will instead be a closed water cooling system from Asetek, that will be sold under the Intel brand.

The company still has plans to sell water cooling seperately for other platfomrs, like LGA775/1155/1156/1366. This will be the first time that Intel officially both recommends and allows enthusiast cooling. Even if the company does not care that much for that, any other cooler than the stock cooler will not be covered by the warranty, excluding Intel brand coolers. Price and availability pending.

Sandy Bridge-E is slated for mid-November with the new socket LGA2011. Except from sporting a record number of pins, it supports quad-channel memory and 40 integrated PCI Express lanes.

It is obvious that the wins are in the memory bandwidth, but also in some WS/Server applications, This is most likely thanks to AVX. This since Sandy Bridge-E officially suppports quad-channel memory at 1600 MHz, while Core i7-990X only supports triple channels at 1066 MHz. There are other optimizations in the memory controller that also contributes, and we expect on average 10-15% better than Core i7-990X. 3DMark 11’s physics tests stands out with massive +36%.

Intel has successors to all Sandy Bridge-E planned for Q2 2012. They will bring modest frequency bumps, but possibly also a new stepping with PCI Express 3.0 support. We have added numbers for the new processors, that should match how Intel normally handles its namings, but reserve for possible errors.