We have just uncovered the performance of Intel’s coming Sandy Bridge-E and we were not disappointed. The platform on the other hand had to be reduced due to some problems, which is now also reflected in the server platform that has been postponed to next year.

Next week Intel will hold its annual event in Moscone Center, San Francisco. What will be disussed is the coming server platform that to partners despair have been moved to late Q1 2012 and may very well arrive together with, or right before Ivy Bridge. This is more than a year after introducing the Sandy Bridge architecture.

The new platform is called Romley and will come in two appearances with LGA2011 and the new LGA1356. It was promised to bring the same as the enthusiast platform with LGA2011 and Patsburg chipset: PCI Express 3.0 and loads of SATA 6.0 Gb/s ports. Instead of releasing the platform with the same limitions on the enthusiast side it waits to offer the entire package for its clients. 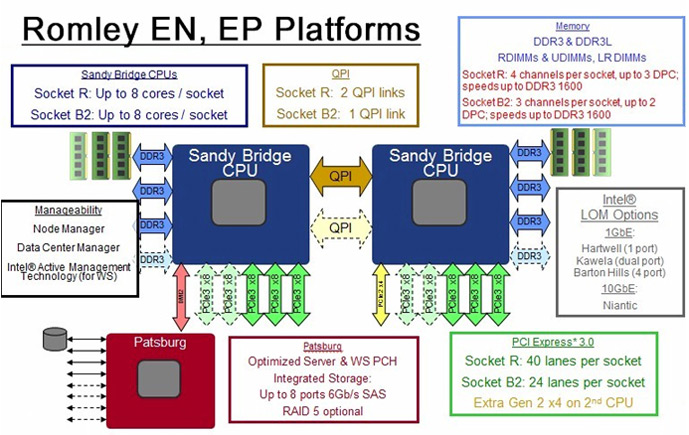 Block diagram over Romsley where it shows the differences between Socket R and Socket B2.

LGA2011 for servers and workstations will change name to Socket R, while LGA1356 will be called Socket B2 and both are clearly distinct.

While noth support similar processors, the processors will be different physically with different number of pins. Socket R will be alone with 2 QPI links, a requirement for running two processors on the same motherboards and will also be the platform for those looking for quad-channel support. 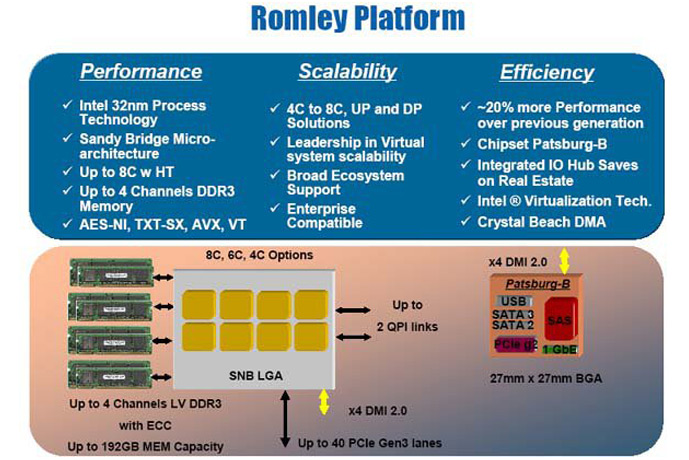 Beside the artificial limitations of Socket B2 the sockets are very similar, they will both use Patsburg (called X79 for the enthusiast platform). Patsburg will come in four versions, Patsburg-A that is the budget model and Patsburg-B, -D and -T with more functions.