The world’s largest processor maker is very dependent on its innovative manufacturing technology and arsenal of fabs. Intel has now deicded to not only upgrade several fabs but also build a whole new one in the US, all to a cost of between 6-8 billion dollar.

Intel will upgrade four existing fabs and build a new one, all focusing on the coming 22 nanometer technology. The investment is confined to USA and will bring 6,000 – 8,000 work opportunities and 800 -1,000 permanent high qualified jobs when the work is completed.

While AMD is planning its first 32nm circuit in the middle of next year Intel will start the mass production of 22 nanometer circuits by the end of 2011 in the form of the Ivy Bridge architecture and then take the next step in its development strategy.

“Today’s announcement reflects the next tranche of the continued advancement of Moore’s Law and a further commitment to invest in the future of Intel and America,” berättade Intels vd och presidant Paul Otellini.  “The most immediate impact of our multi-billion-dollar investment will be the thousands of jobs associated with building a new fab and upgrading four others, and the high-wage, high-tech manufacturing jobs that follow.”

The fab will be located in Oregon and will be called D1X and be ready for research and development in 2013. Today already Intel manufactures 10 billion transistors per second and with the new investment it hopes to increase the numbers and reduce the size. 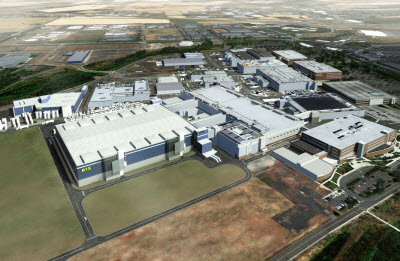