Hem Nyheter Intel Atom sinking like a stone – a transition? 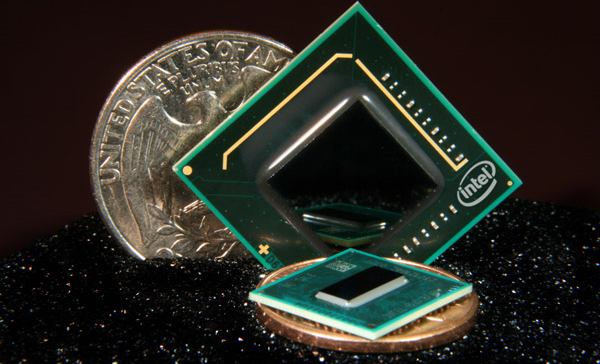 Intel had a good quarter and while demand for its processors went up overall, there was one huge exception; Atom. Atom is selling 50 percent less than it did six months ago, and netbooks are constantly losing ground.

Intel Atom and netbooks had its 15 minutes and started to drop slowly, and right now it is plummeting. From selling for a total of 352 million dollar in Q2 2011, Atom has sunk like a stone and only six months later, Q4 2011 it is down to 167 million. 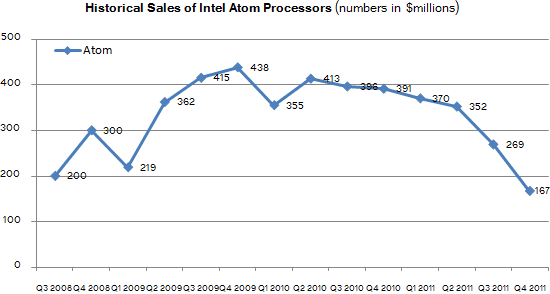 There are many factor, but most of all tablets are intruding on its market space, ubt also that regular notebooks have become cheaper. The price difference between a netbook and notebook is simply too small, but also AMD’s Brazos platform plays a role here.

It is too soon to predict the end of Atom. Intel is just starting to get into smartphones, and it dones have some design wins for tablets that will come to light with Windows 8. The focus for Atom is on these two segments, but it is not quite ready to abandon netbooks that is part of the ULCPC strategy (Ultra Low-Cost Personal Computer), since there is a strong demand in developing countries.

Atom did not deliver much performance when it lauched and the architecture has not changed to any significant degree since then. It is not until 2013 when the new Atom architecture ”Silvermont” arrives, which will be used in PC and handhelds like smartphones and tablets, that we will see a real difference. Is that the right time to reintroduce and market Atom for PCs? Until then it looks like developing countries will be the main market for Atom PCs.