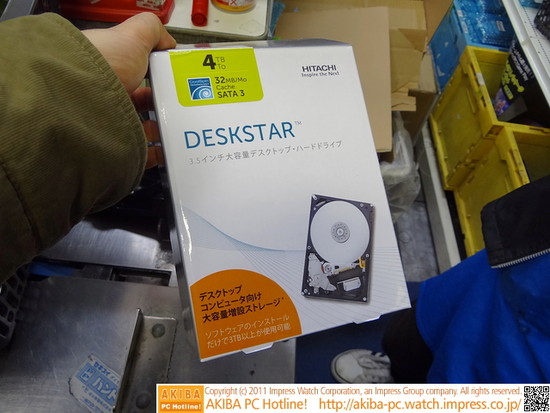 Hitachi, now owned by Western Digital, looks to go against the market trend start sales of a new top model with 4TB capacity. Hitachi’s new drive will be part of the Deskstar 5K series and is out on the Japanese market.

Harddrive prices have tripled over the last couple of months and in Sweden consumers, computer builders and retailers have all been struck badly. While the harddrive manufacturers are struggling with their product lines, not the least Western Digital, the wholly owned subsidiary Hitachi Global Storage Technologies stuckl to its roadmap. Hitachi has started selling a new 4TB model with product code HDS5C4040ALE630, which isn’t even listed on the official website at the time of writing. 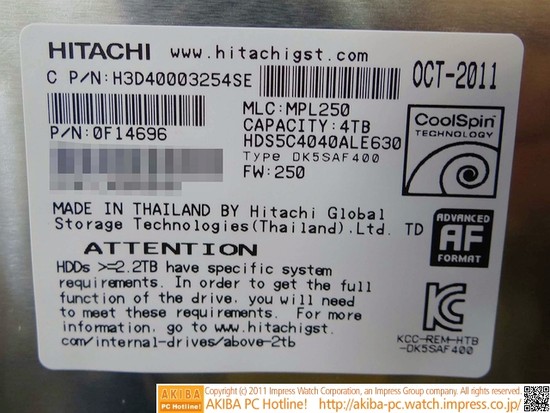 According to Akiba PC Watch and pictures from a Japanese retailer the harddrive belongs to the Deskstar 5K series sporting 32MB buffer and SATA 6.0 Gbps interface, with a 5900 RPM engine. The harddrive is believed to house four 1TB platters. According to the product label the drive is made with components from Thailand, where floods have caused severe damage and problems for many companies involved in the harddrive manufacturing.

The price for Hitachi’s record-size harddrive is 26 800 Yen, 345USD. We have found another 4TB drive Hitachi, Hitachi Deskstar H3IK40003254SW 32MB 4TB, listed for 2900 – 3900 SEK at a local price comparison site. Harddrive prices have dropped over the last few days, but they are still highly unstable, but we consider it a good sign that the manufacturer keep moving forward and release new models.