Gigabyte X58A-OC can use 3 PSUs in the record hunt

Gigabyte will soon unveil a new overclocker motherboard for the LGA1366 platform, X58A-OC. Besides support for Intel’s hexa-core Gulftown processors Gigabyte has equipped this extreme motherboard with an almost ridiculous CPU power supply with capacity up to 1,200 watt, and power connectors for up three different power supplies.

Gigabyte X58A-OC is developed as a weapon for extreme overclockers in the hunt for new performance records and already before the board has launch it has broken the first record. Overclocking guru Hicookie has in a video on YouTube shown how the manual overclocking lever, OC-Touch, pushed Intel Core i7-990X to record high 7,092 MHz.

Gigabyte hasn’t held back when developing the X58-OC motherboard and beside an oversized power supply with 50A MOS circuits in a 12-phase configuration you can change the PWM frequency to get the very last drops from the processor during extreme overclocking. A solution Gigabyte calls OC-VRM. 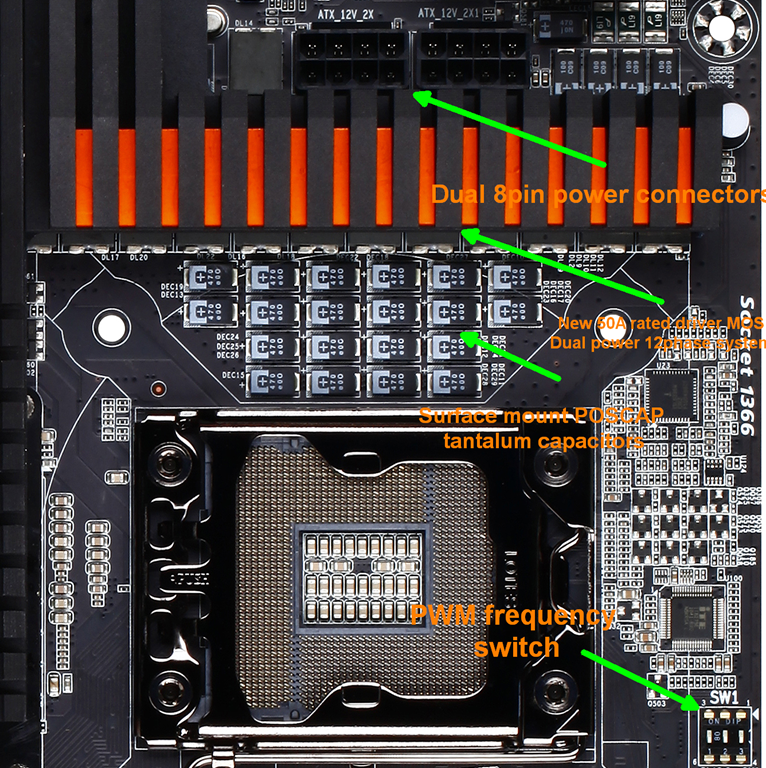 OC-Touch makes it possible to change both bus and multiplier directly on the board through physical buttons whiel an error LED panel and measuring spots for voltages makes it easier to keep track of the health of the board.

OC-PEG is another piece of the power supply puzzle where it uses two SATA power connectors, placed around the SATA ports, for giving the PCI Express slots extra juice during overclocking with 3 and 4 graphics cards. These connectors can be used to connect a second and third power supply if you want.

Gigabyte X58A-OC looks like something really out of the ordinary and should launch in March. Price unknown.

An overview of the features has been presented by Hicookie on Youtube.