With the launch of Haswell around the corner motherboard makers are starting to show off their coming plans for the platform. Next up is Gigabyte. Just like Asus it has presented boards for enthusiasts, gamers and regular consumers, and models with 802.11ac Wifi and Thunderbolt.

Gigabyte has prepared a bunch of motherboards for the coming generation of Intel processors, and like the competition there are some aesthetic changes to the main line. The boards will also sport DualBIOS, the successor to Gigabyte’s UEFI, 3DBIOS.

First we have the mid-range model GA-Z87X-UD4H in black and red, equipped with three PCI Express X16, three PCI Express X1 and a classic PCI slot. Exactly how the bandwidth is distributed between the X16 ports is not clear though. There are eight SATA ports, all 6 Gbps, and four internal USB 3.0. Gigabyte has also given the card plenty of video outputs, six external USB 3.0, Gigabit networking and two eSATA ports. The board has on-board Start and Reset buttons, a LED poster for troubleshooting and 16 phase power supply.

Gold-colored Z87X-UD5H is the big brother of Z87X-UD4H and the flagship of the series. While the PCI Express configuration is the same as with UD4H, UD5H offers another two SATA 6 Gbps ports and the possibility to more power via SATA power connector. Also here we find LED posts, Start- and Reset buttons, and 16 phase power connector. The I/O panel is also similar to UD4H, but UD5H lacks eSATA and instead has a network port.

Looking at the overclocking series the flagship is instead X87X-OC Force. The cooling is active and the colors are mainly black and orange, and for those able and willing connectivity for water cooling. The motherboard also comes with no less than five PCI Express X16 slots, with support for Quad SLI, and two PCI Express X1. At the expansion ports there is a frame for stabilizing graphics cards that run outside of a case.

The ports are the same as Z87-UD5H, with ten SATA 6 Gbps, a total of ten USB 3.0 ports, HDMI, Displayport and dual network ports. Not surprisingly we find extra power via a SATA connector, and an extra 4-pin connector for power to the processor. Gigabyte has also installed two rows of physical buttons for overclocking and a LED poster. 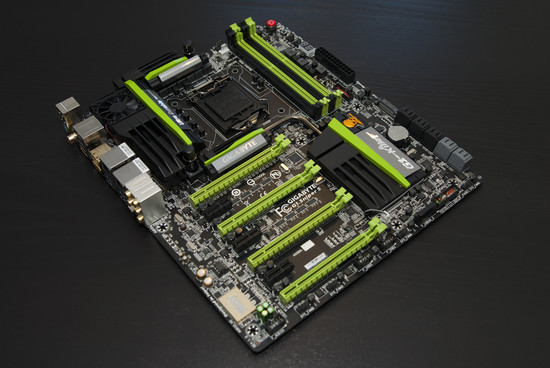 The gamer series holds the G1 Sniper 5 in black and green colors. Here we have four PCI Express X16, three PCI Express X1, ten SATA 6 Gbps and four internal USB 3.0 ports. On the I/O bracket we find two Ethernet ports, six USB 3.0, HDMI and Displayport. A distinguishing feature is the sound card, marked Creative Sound Core 3D, where the user can swap the opamps for new sounds. There is also extra power over SATA and active cooling with connections for water cooling.

Gigabyte has also presented a mini ITX model called Z87N-WIFI, and as the name implies the motherboard sports integrated 802.11ac wifi; and Bluetooth 4.0 on the same chip. Despite the small formfactor the board offers one PCI Express X16 slot, four SATA 6 Gbps and dual Gigabit Ethernet ports.

All models shown will be launched alongside Intel Haswell at the start of June, with more models planned for the Summer and Fall. No prices have been announced as of now. 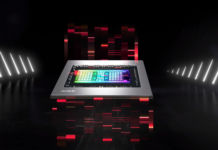 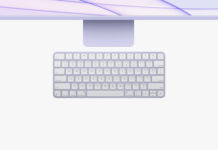