GeForce GTX 590 got a rough start when several test samples simply gave up during early overclocking tests. Something NVIDIA looked to have solved with a BIOS update, but now comes the next blow where the new flagship has been filmed by an IR heat camera hitting 111.9 degrees on the display.

NVIDIA released a BIOS update that can solve the problem with overheating graphics cards and overloaded voltage regulators, but when French Hardware.fr made a deeper temperatyre analysis of GeForce GTX 590 it got some concerning results. The card was showed into an Antec Sonata case with relatively poor ventilation for a more real worst case scenario (no pun intended). With both frequencies and voltages at default the temperatures climbed well above 90 degrees Celsius, but it didn’t stop there. 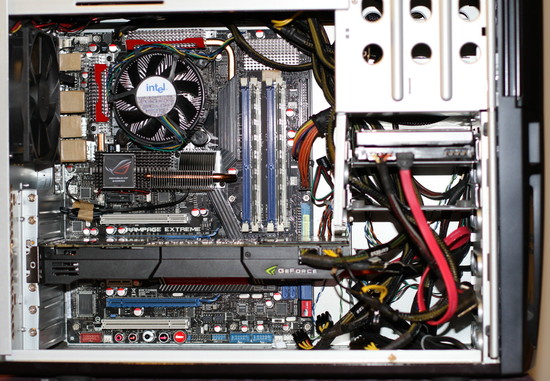 With their infrared heat camera they concluded that the highest temperature of the card was 111.9 grader Celsius, not surprisingly the hottest spot was between the GPUs, where we find the power circuits.

In the same tests Radeon HD 6990 resulted in a maximal temperature of 90.3 degrees Celsius, on the one GPU. In the overclocking mode where the card will consume 75 watt more than GeForce GTX 590 the highest temperature rose to 96.1 degrees Celsius. Also this time it was the GPUs that were the hottest spots.

We can draw several conclusions from this, that both AMD and NVIDIA are struggling to keep the new generation of monster cards cool. Both have chosen a cooler design that increase the temperatures of surrounding components, both are doing poorly there but NVIDIA is doing worst. Finally it looks like GeForce GTX 590 is having serious problems with keeping the regulators cool.

How much of a problem this is for NVIDIA’s new monster card in the long run is hard to say. No matter if you buy Radeon HD 6990 or GeForce GTX 590 you have to make sure to have a well ventilated case.