NVIDIA has shared the fun fact of the week at its official Twitter account, and it is the names of the first two GF100 graphics cards. GF100 is the code-name of the retail version of the Fermi architecture and it is slated for arrival near the end of Q1. The names were revealed as GeForce GTX 480 and GeForce GTX 470.

NVIDIA has thus skipped a whole number series, disregarding the rebranded low-end cards, and will dedicate the GeForce 400 series to the new architecture.

Fun Fact of the Week: GeForce GTX 480 and GeForce GTX 470 will be the names of the first two GPUs shipped based on our new GF100 chip!

Detailed specifications are still absent but we know for sure that it will contain 3 billion transistors and the sturdy Fermi GPU will house  512 stream processors. This is twice the amount of the current GeForce GTX 200 series. Paired with 384-bit memory bus and fast GDDR5 memory there should plenty of crunching power and memory bandwidth.

Beside jumping directly to the GeForce 400 series NVIDIA has used a naming scheme like the one used with the current 200 series. GeForce GTX 480 and GeForce GTX 470 should therefore sport the same amount of  stream processors, but work at different frequencies. 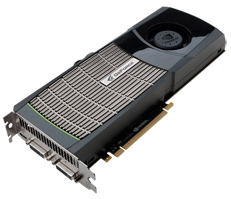 This hasn’t been confirmed though and with more stream processors at its disposal NVIDIA can very well cut clusters to separate the cards. At least now we know the names of the cards to look for in the listings.