GeForce GTX 480 is the fastest single-GPU graphics card on the market. No matter the possible downsides, the card is still very powerful and if you can live with the high power consumption and manage the heat there is a lot to get. Our own tests showed that the card scaled well with frequency.Shamino and Kingpin decided to take it to the highest level. Over the last few weeks they have taken down every record of Futuremark’s 3DMark Vantage series using four GeForce GTX 480.

In 3Dmark Vantage Performance they managed to push the four graphics cards to 1,020 MHz GPU clock frequency and 1,250 MHz memory, while the processors operated at 5,500 MHz.

The complete system specifications were as follows;

The new world records aren’t just small improvements of the old ones, but in most cases pure devastation. Not all credit should go to NVIDIA and GeForce GTX 480 though, but much of it should go to the very capable hands that steered them right. 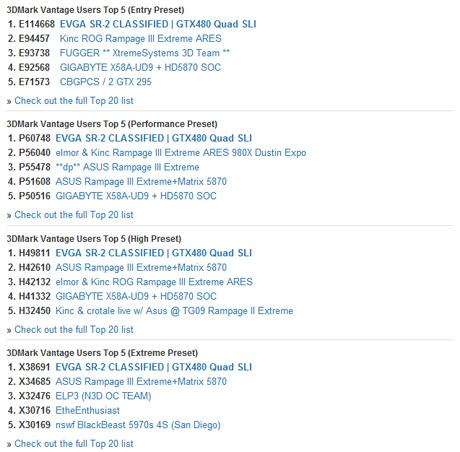