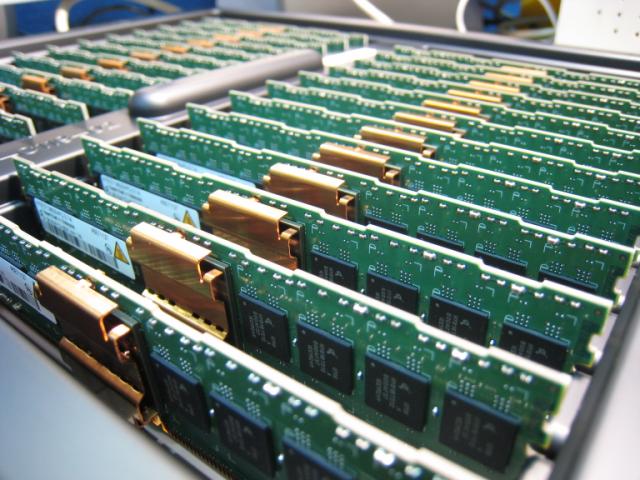 For servers and workstations with DDR3 the speed has been set to 1333 MHz for over two and a half year now. New processors from AMD and Intel supports higher frequencies, which has forced the giants to start mass producing faster RAM with ECC support.

DDR3 was introduced in 2007, but it was not until March 2009 it found it’s way into servers with Intel 5500, and later in the middle of 2010 with AMD 4100 and 6100. The advantages of DDR3 was faster speeds and lower energy consumption. Servers with Intel’s and AMD’s new processors could use DDR3-1333 with ECC (Error-correcting code memory), unlike before when DDR2-800 ECC was the max.

ECC is a must for servers, but also some workstations where it helps to prevent data corruption. The market is once again about to change with the launch of the AMD FX series that has official support for DDR3-1866 in two channels with ECC. While AMD’s FX processors did not impress us, it is cheaper than the alternative Intel Xeon, since its regular retail processor does not support ECC.

Samsung has started mass producing DDR3-1866 CL13 with ECC to meet the demand. These memories will come in four different setups; 1 GB, 2 GB, 4 GB and 8 GB, where the highest capacity modules use 4 Gb circuits.

Hynix also has memories coming with similar specifications, although only in capacities of 4 GB and 2 GB. Its 4 Gb circuits can be used to build 8 GB DDR3-1866 CL13 ECC modules but is still under evaluation, but should start mass product soon.

Also Micron has modules with DDR3-1866 CL13 ECC specifications, but only in 2 Gb capacity, which limits them to modules with 4 GB modules. It is uncertain if Micron will bring 8 GB modules at 1 866 MHz with ECC.

AMD’s Interlagos, and Intel’s Sandy Bridge-E will be released soon and both support quad-channel memory at DDR3-1600 with ECC. This is the most lucrative market for Samsung, Hynix and Micron since DDR-1866 with ECC will be a niche for at least a year to go. All three has modules with capacities of 16 GB and below at DDR3-1600 CL11. Micron is the only one to offer modules with DDR3-1600 CL10 specifications, while Hynix is evavluating the first 32 GB modules at DDR3-1600 CL11 ECC.

Future server processors based on Intel Ivy Bridge and AMD Piledriver will support DDR3-1866 ECC. This is something all three are said to be ready for when the demand rises. If the memory market continues to develop in this direction, we will certainly be needing new memory in future.