EVGA is apparently working on one of the first motherboards supporting dual Core i7 processors. The company has shared a picture at Twitter where we can make out two LGA 1366 sockets and a total of twelve DDR3 memory slots. With EVGA’s enthusiast gearing we can’t say we’re surprised it’s EVGA that has released this picture.

EVGA reveals no details on the specifications of the motherboard but most likely we’re dealing with Intel’s Tylersburg chipset, also known as Intel 5500, which is used with today’s multi-socket Xeon processors or coming LGA 1366 processors.

When EVGA decides to enter the workstation segment with a dual-CPU motherboard it feels like a pretty clear indicator that we may be facing the second generation Skulltrail platform soon. A platform that has been circulating the rumor mill for some time.

Skulltrail 2 would be the first enthusiast platform with dual Core i7 processors and we wouldn’t be surprised if will use Intel’s coming hexa-core Gulftown processors for some serious multi-threading performance. 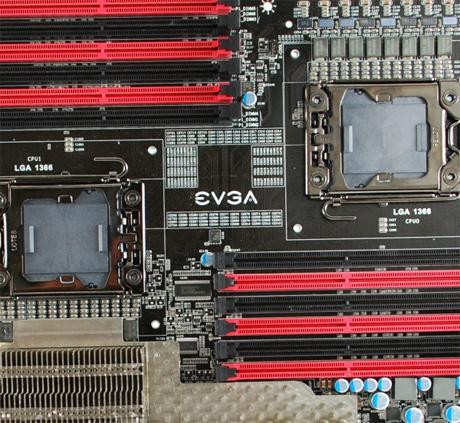