EVGA Classified SR-2 became the final name of one of the more extreme motherboards we’ve ever seen. The motherboard has Intel’s server-grade chipset 5520 support for no less than two LGA 1366 processors and even if Intel’s Core i7 980X Extreme Edition isn’t supported in a dual setup we can see support for the all new Xeon 5600 family, the server equivalent to Gulftown, which adds up to 12 cores and 24 threads.

We know what EVGA’s mother motherboard can do in the right hands and the name is short for ”Super Record 2”, which is more than a hint of what it can do. The product name is EVGA 270-WS-W555-A1 and beside that there are a few things a potential buyer should know. The motherboard requires an extra large case with room for no less than nine expansion slots (HPTX formfactor) and costs 600 USD. 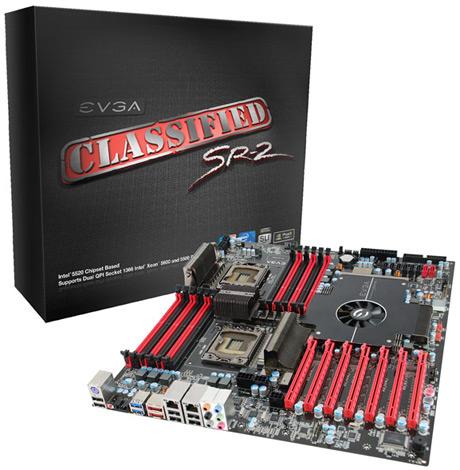 EVGA has revealed that it will also launch a special SR-2 power supply with 1200W output (max 1500W) to become the right companion for this extreme motherboard. More details on the EVGA power supply shortly.