China is really serious about its new Nebulae system. The system is built around a Dawning TC3600 blad system using Intel X5650 processors and Nvidia Tesla C2050 GPUs. The Chinese supercomputer has now been ranked as the second fastest in the world.

Now that the 35th edition of the Top500 list, covering the world’s fastest supercomputers, has been released Nebulae has reached Linpack performance of 1.271 Petaflops, while it is the fastest system with a theoretic peak performance of 2.98 Petaflops. This is mainly thanks to the NVIDIA Tesla C2050 graphics circuits, Tesla-based of course. 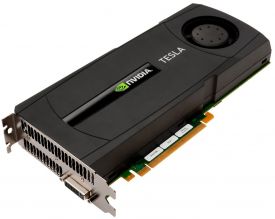 We’re excited to see who the American supercomputer builders and above all Cray Jaguar will tackle this, even if the latter is still in charge with 1.75 Petaflops. There is no doubt that someone will try to defend the American honor with an even faster system as soon as possible, especially peak performance.