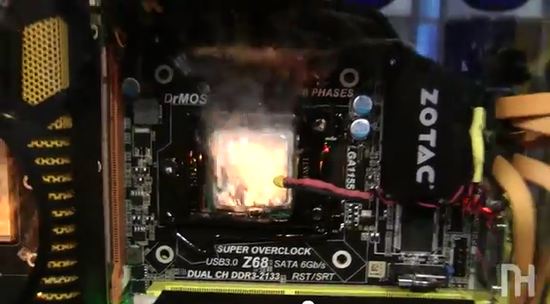 It’s never a good idea to wet your hardware, but Zotac has shown an exciting solution together with 3M. What Zotac had done is to cool a processor without any form of heatsink using 3M’s special liquid.

In Zotac’s booth we found a system that was literally submerged in some form of liquid. 3M has been in the new before with its heat-conductive glue, but has now developed a cooling liquid called Novec 7000. Novec 7000 is neither conductive nor corrosive, which makes the system quite comfortable.

What makes Novec 7000 special is that, besides the above mentioned, it boils at only 34 degrees, which is perfect for this kind of cooling. This means that as soon the graphics card or processor reaches 34 degrees the liquid will boil, steam rise to the surface, cool down in a radiator and go down into the tank again.

The system is loadad by Furmark and Prime95 where we see some quite interesting temperatures. The graphics card had a small heatsink that resides at around 43 to 49 degrees Celsius at full load. The processor is a quad-core Sandy Bridge processor at 64 to 67 degrees, but it is worth pointing out it didn’t have a heatsink. The only thing the naked processor comes into contact with is the cooling liquid Novec 7000. 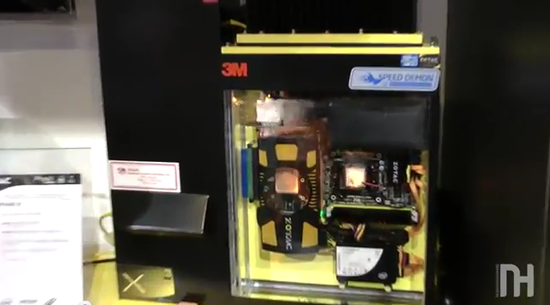 The heatspreader in question has a layer of diamond dust and was baked in an oven, with a process proprietary to 3M. The processor gets more boiling points for better heat emissions. The processor can be overclocked to 4.8 GHz stable said Zotac, and with the hetasink it is likely that the limitation of the processor will stop before the cooling.

Those who want to buy some Novec 7000 for their own use, and some crazy project can actually buy it. If you can find a retailer it will cost around 250 dollar per gallon, not exactly cheap. But it is a very innovative soluition for servers and supercomputers, but also potential for retail solutions in closed systems. Zotac is planning to sell system with this kind of cooling, but the price is yet to be decided.