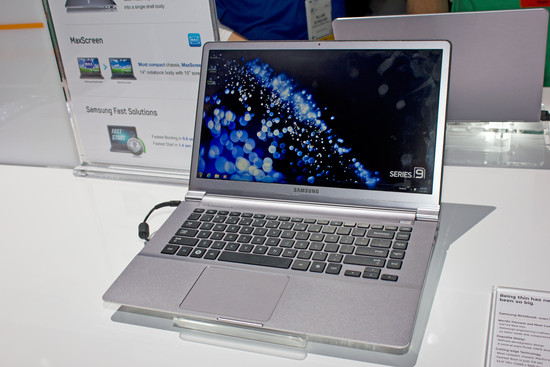 The Ultrabook concept has requirements for a thin profile and all we have seen have had it, but the Samsung Series 9 is really something special. Besides an ultraslim profile it will sport Intel’s new Ivy Bridge processors.

Ultrabooks can at most measure 20mm in profile, and while most companies have managed to go down to 17 – 18 mm, Samsung is in a different league. You could say that Samsung, besides MacBook Air, was first with an Ultrabook with its 9 series and the successor is coming in two sizes at 13″ and 15″.

First we have the 13″ model that is only only 12.9mm in profile, which is the thinnest we have ever seen. The 15″ model is also impressive at 14.9mm, and we assume that it is slightly thicker because it would perhaps be unstable at only 12.9mm. The keyboard felt alright, but the 13″ model was not as nice. This is a side effect from the slim profile. They also have different resolutions, the smaller model 1366 x 768 pixels, while the larger models gets 1600 x 900 pixels.

The overall construction fel solid and the design is aesthetically pleasing, with larger than average screens thanks to smaller bexels. The new Series 9 comes with a ”Core i7 processor” which was all Samsung wanted to reveal, and with a launch date in May it does not take a genious to understand it will be Ivy Bridge.

Samsung says the 15″ model will sport up to 10 hour battery time. Exactly how it managed to fit such a large battery inside the case we don’t know, but it bodes well for Intel Ivy Bridge. At the moment we have no information about the battery time for the 13″ mode, but we would assume it is less.

Samsung hopes the new Series 9 models will replace the old ones on the same price legel. Considering the features we would expect them to cost a bit more though.