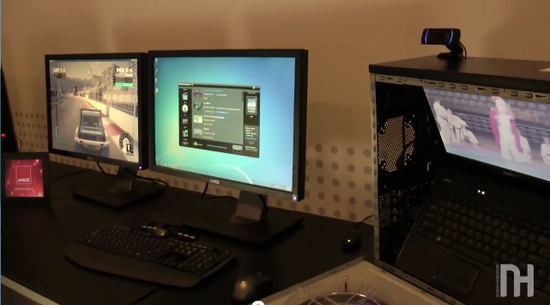 AMD had no real booth at CES, but rented a room where you had to book a time to meet with them. NordicHardware was there to discuss Trinity, the successor to Llano. What we bring back is performance indications and an estimated launch.

AMD Trinity will sport two refined Bulldozer modules, Piledriver sports four cores, and new graphics based on the more efficient VLIW4 architecture with a total of 6 cluster with 384 Radeon cores. Besides this the northbridge and memory controller have been tweaked, which is sorely needed since the graphics in Llano is screaming for more bandwidth.

The test system AMD had to show was the reference platform for notebooks, which it claims holds a mainstream solution of the next generation A series, Trinity. Besides powering DiRT 3 with good FPS, it encoded video and played a movie at the same time on a notebook, which according to AMD is not the top model of Trinity.

The reason it focused on the graphics is that several developers have started to adjust their APIs to OpenCL and DirectCompute (part of DirectX), which is kind of the whole idea of the Fusion concept. The launch is slated for mid year. Since Llano launched in the middle of 2011 and end of June it is not wrong to say trinity will arrive about the same time in 2012.