AMD has struggled to keep up with the demand for the energy efficient Brazos platform, which has been extra evident in retail where the popular Mini-ITX motherboards have been short-stocked. After a overwhelming demand from system builders it looks like availability is about to improve.

AMD Brazos with its energy efficient Fusion APUs is especially interesting for HTPCs. AMD E-350 is the APU that most company have taken a shine to and with dual CPU cores at 1.6 GHz and a DirectX 11 GPU it is the most powerful of the family.

Even though AMD launched the Brazos platform as early as January availability has been rather poor. There are several Mini-ITX motherboards listed in stores with AMD E-350 on the heatsinks, but few are in stock. Not the least ASUS E35M1-I Deluxe that has become a favorite in the test lab.

Distributors are now saying that a larger shipment of Fusion motherboards is coming, which has also been confirmed by the manufacturers. On March 29th several large retailers expect large volumes of ASUS E35M1-I Deluxe. Also competing MSI that has launched a more Spartan but also cheaper solution is expected to gain spread at the start of April, while Gigabyte currently has the best availability, even if stock is limited. 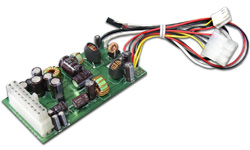