Asus ROG Immensity is a motherboard, which may feel like a given at first but it’s not when you look closer. This product concept doesn’t just have a dedicated GPU, namely AMD’s Radeon HD 5770 but also a Lucid Hydra bridge chip.

Asus is one of many companies at Computex that is allowing creativity to flow free and ROG Immensity has been influenced by many things. The Intel X58 based motherboard comes with a Hydra circuit from LucidLogix, which makes it possible for users to plug in any graphics card and connect them in a multi-GPU configuration.

With that solved it also decided to install a dedicated GPU and in this case a, for the mobile market, very powerful such, Radeon HD 5770. AMD’s Juniper GPU has 800 stream processors and the graphics circuit is accompanied by 512MB GDDR5 memory, directly on the motherboard. 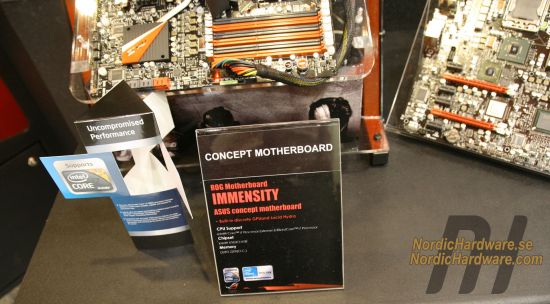 The idea is that the integrated GPU will be used in combination with a discrete graphics card and through the Hydra circuit there will be an extra boost in performance. Even if we know for sure that the graphics circuits is indeed a HD 5770 GPU, we don’t know the clock frequencies or any other possible limitations.

Asus ROG Immensity has the perhaps most powerful integrated GPU we have ever encountered, but whether the card will actually make it to market is a whole other story. The price of around $300 sounds almost too cheap, but for that to happen Asus has to tame the heat development of the relatively advanced graphics circuit.