ASUS MARS II looks to premier next week at Computex 2011 in Taiwan. The successor to MARS will sport dual GTX 580 GPUs that will operate at frequencies similar to the single-GPU version, even if this hasn’t been confirmed. The card will have 19 phase power supply and been further detailed now.

ASUS will launch two new graphics card flagships at Computex, besides the monster ASUS MARS II it will also unveil ASUS MATRIX GTX 580. Both cards will according to rumors both sport power supplies like no other cards. A total of 19 power phases with super alloy technology for better stability, longer life and lower temperatures.

Beside the power supplies the cooling technology is similar, both cards will be a DirectCU II modell that we suspect is different from current versions. At least with MARS II and its dual GPUs.

ASUS has also developed a new overclocking interface where you can set frequencies and voltages for four independent GPUs. ASUS MATRIX GTX 580 also gets physical levers for overclocking on the board, but also support for TweakIt, ProbeIt and Safe Mode.

ASUS MATRIX GTX 580 comes with 1.53GB memory and ships with two different frequencies. The stock model settles for 782 MHz GPU, while the Platinum model can boast 816 MHz GPU. Both have memories clocked at 4008 MHz. 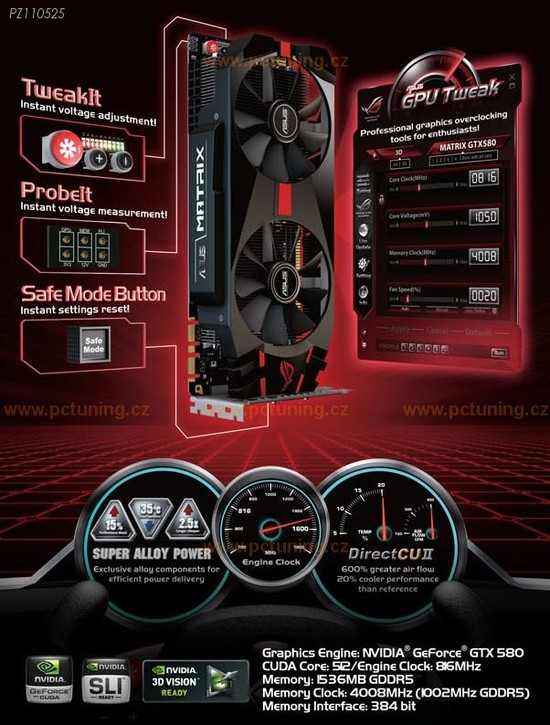 ASUS MARS II has no specified frequencies, but to make it different from GeForce GTX 590 ASUS will use as high frequencies as possible. The card sports dual GF110 GPU for a total of 1024 CUDA cores and 3GB GDDR5 memory. More information is expected at Computex 2011.